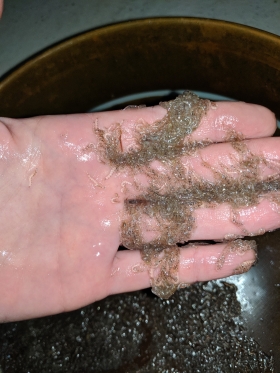 For such a small creature, mysids—Neomysis americana, also known as opossum shrimp—can be a big challenge to study in the Chesapeake Bay. This wouldn’t be a problem if they also didn’t pack such an outsized wallop in terms of their importance in coastal food webs.

Now, a Maryland Sea Grant-funded study is combining traditional surface netting with cutting-edge, deep-water sonar imagining to better understand their distribution, behavior, and abundance. The ultimate goal is to provide resource managers critical baseline data about these important species to improve the accuracy and effectiveness of ecosystem-based models.

“We know from a slew of studies on fish diets that mysids are critical to these food webs, but we just don’t know much about them because they’re such a pain to study,” says Ryan Woodland, an assistant professor at the University of Maryland Center for Environmental Science (UMCES) Chesapeake Biological Laboratory (CBL), who is leading the study. “Their ecology makes them difficult to sample using standard techniques, and that’s why to date we haven’t known that much about them in the Bay.”

With a maximum length of about 1.5 centimeters, mysids are important food sources for species including weakfish, summer flounder, and American shad. They are also key consumers of organisms like copepods and phytoplankton. Because they migrate through the water column—clustering near the bottom during the day and spreading out near the surface at night—they act as biological transfer mechanisms between food webs within the water’s layers.

But it’s also this behavior that makes them a tough study subject.

“They’re really hard to catch in a net during the daytime because they form these dense aggregations like swarms of bees on the bottom,” Woodland says. “So, chances are you will miss them. It’s only at nighttime that you’re going to catch them consistently.”

Working with Hongsheng Bi, an associate professor at Chesapeake Biological Laboratory who specializes in advanced optical imaging systems, Woodland has for the first time used high-resolution Adaptive Resolution Imaging Sonar (ARIS) to “see” mysid swarms at the Bay bottom during the day. (Until now, ARIS has been used to identify schools of menhaden and anchovies, and Bi uses it in his research on jellyfish.) Coupled with traditional zooplankton netting conducted at nighttime when the mysids are near the surface, Woodland and his colleagues have been able to develop a far more extensive picture of what mysids are up to in the Bay.

Over two years, he and a small team of students completed 40 trips in the Choptank and Patuxent rivers from May through September. At seven stations in each, encompassing different levels of salinity and bottom topography, they sampled mysids day and night. They also monitored salinity, temperature, and water quality throughout the water column and used carbon and nitrogen isotopes to investigate what the mysids were eating, and where.

“When we go out at night, we take everything we catch in the net, count them, identify males, females, and juveniles, and then we can calculate the concentration of mysids at that spot because we know how much water we sampled, how big the net is, and how many we caught,” Woodland says.

ARIS sampling during daylight “gives us the same sort of information we would get if we put a net over the side. We can identify where the swarm is and then say, ‘OK, if a swarm was here, what kind of water quality is there, what’s the habitat like?’ So, we can use the information from the sonar with statistical models to understand their habitat use in the day…the sonar gives us different information, but it can tell us exactly what depth the swarm is, so it’s a higher resolution measure of where they are in the water column.”

Data analysis so far has shown much higher mysids abundance in the Choptank than in the Patuxent during 2018, Woodland says. Interestingly, emerging results suggest that abundances were much more similar between the two rivers during 2019.

Also, females in the Choptank carried more eggs than those in the Patuxent, though no genetic differences exist in the rivers’ populations. As the 2018 Patuxent River water samples showed higher stratification and lower dissolved oxygen than the Choptank, this indicates that water quality may affect abundance and fecundity. The change from 2018 and 2019 also indicates that year-to-year differences in local conditions can have a large effect on the abundance of mysids in the two rivers.

“Is there more or better food available there (in the Choptank River)? Is it because the environment is better in terms of better water quality?” Woodland says. “It begs the question, if that’s the case for mysids, is that also the case for other juvenile fish in other trophic levels? That’s a question that the public and managers are interested in.”

Woodland and his team have also learned that there are more species of mysids in the Bay than they thought, and they shift seasonally. Danielle Quill, a Maryland Sea Grant graduate research fellow who conducted sampling and analysis during the study, says there are four known mysid species in the Bay— Neomysis americana, Americamysis bahia, Americamysis almyra, and Americamysis bigelowi. “But I actually found a couple species that I didn’t find in the literature that hadn’t previously been identified here,” she says.

And, the research shows that the different species’ abundance changes through the seasons. During the summer, Neomysis americana is most prevalent, but in late summer and fall their numbers drop, while the genus Americamysis increases. Woodland expects that is Americamysis bahia, but “distinguishing them can be hard and is beyond this current project, so we just ID to the genus level.” Regardless, “it looks like there is a seasonal turnover within the genus and species.”

Along with providing resource managers with baseline mysids data, Woodland worked with Elka Cahn and about 30 advanced computer game design students at University of Baltimore Shady Grove, who developed five prototype computer games and one board game based on mysids.

“Some of the students focused on the possible importance of water quality and pollution and how that might affect mysids. Some of them focused on the food web, so if you can feed more mysids to the fish you get a better score in the game because you’re helping the food web. One team developed a board game, you could 3D print the game pieces,” Woodland says. “It was a really fun experience.”

In this video of the ARIS sonar picking up mysid swarms during the daytime, when they are close to the bottom, there are several mysid aggregations: one at the very start, one near seven seconds, and one near 20 seconds.