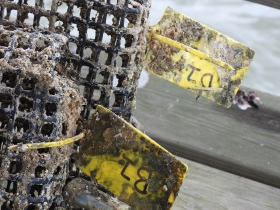 In its simplest form, growing oysters is a matter of getting baby oysters (spat) on shell, placing them in some kind of containment—whether resting on the bottom or hanging in the water column—and letting them do their bivalve thing, filtering water and growing. But for people whose livelihoods depend on consistently producing high-quality oysters for restaurants and individual consumers, it’s rarely that easy.

The very medium in which oysters grow is in constant movement and flux, as tides, currents, and weather-driven waves push water around and through those oysters. How that flow and movement in all its variability affects the way oysters grow is the fundamental question behind the research of Maryland Sea Grant fellow and PhD candidate Brendan Campbell.

By developing and testing some inexpensive tools that can monitor water movement and flow through oysters and oyster gear over time, Campbell is hoping to provide growers with insights about where best to site their gear within their leases to maximize quality and production.

“There’s always been this perception that flow is directing the size and shape of the oyster, but some of the work we’re doing is showing that it’s the movement of the oyster inside the bag that’s shaping it, as a natural process,” says Campbell, who conducted two years of research at the University of Maryland Center for Environmental Sciences (UMCES) Horn Point Laboratory. “That contributes to its quality.”

More intense movement, such as strong waves moving cages about, seems to result in a well-shaped, deeply cupped oyster but one that grows more slowly and whose meat isn’t as good. Steadier movement leads to a flatter, less shapely oyster but one whose meat is better and grows at a more reasonable rate, Campbell says.

For growers who are trying to achieve a certain shape, depth, and size of oyster, manipulating these variables can make a huge difference. But trying to measure and quantify precisely how to accomplish this is the trickier part of Campbell’s work.

During his research at Horn Point, Campbell developed two tools to measure water flow and movement. Molding plaster of Paris and distilled water in ice-cube trays, he made clod cards that can be suspended in oyster gear. As water moves across them, the cards dissolve at a linear rate, providing data on how much water is flowing through the gear.

The second tool is an off-the-shelf, $85 accelerometer, about the size and shape of a Snickers Fun Size bar. By placing one inside the bag with the oysters and attaching one outside the bag, Campbell can gather constant movement data showing how much currents, tides, and waves are jostling oysters.

Pandemic restrictions in 2020 prevented Campbell from taking his research into the field, but in 2021 he finally was able to conduct experiments within a farmer’s oyster lease in Solomons, Maryland, on the Patuxent River. In June, he deployed 18 bags with 185 oysters per bag in locations across the lease, leaving them in through November.

Every six weeks, he pulled the bags and dumped their oysters. He culled dead ones, noted their number, and then measured 30 of the remainder for shell depth, width, and length. Then, he’d retrieve the accelerometers, clean them, and plug them into his laptop to download their data and reset them for redeployment.

He also deployed clod cards in the bags five separate times, retrieving them four to six hours later to note their change in mass to measure water flow and velocity.

Campbell’s task now is to analyze the data to determine if and how water movement and flow in different areas of the oyster farm affect growth, shape, and meat quality. Preliminary data indicates that the relationship between flow, movement, and growth is varied and complex.

“There’s still a lot of work that needs to be done to make sure that what’s happening isn’t random,” Campbell says of the data. “If I’m going to make a conclusion that may have an impact on growing, I have to make sure it’s absolutely pristine and unquestionable.”

Ideally, he hopes to be able to provide oyster growers with information that can help them fine-tune their gear placement to achieve the kind of growth they are seeking. Coupled with the tools he’s refined to continually monitor water movement and flow in the gear, Campbell hopes to develop specific, data-driven parameters that growers can use as guidance to modify their grow-out methods to optimize their oysters’ growth and quality.

“The goal is to develop these tools so that farmers can take the environment they have, their lease, using their cages and equipment, and create a more optimally suitable environment for their oysters, regardless of where they are,” he says, “and I think these tools can do a good job of providing that.”

Photo, top left: A stack of oyster bags, tagged to indicate where they are located within a grower’s lease on the Patuxent River, leans against a dock as Brendan Campbell prepares to remove their oysters for measuring. Photo credit: Wendy Mitman Clarke / MDSG