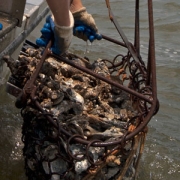 There may be a new way to take some of the gamble out of oyster restoration to the Chesapeake Bay. The trick comes down to keeping an eye on the weather.

Scientists and watermen alike have long known that winter weather patterns have had huge influences on Eastern oyster (Crassostrea virginica) populations in the Bay. Like getting a bad spin on a roulette wheel, the estuary’s oyster bars often lose big after a wet and warm winter, experiencing large die-offs in young oysters. Following cooler and dryer seasons, however, oysters seem to do better.

In a recent study funded by Maryland Sea Grant, a team of scientists from around the Chesapeake pored through roughly 70 years of data on oyster populations to gain new insights into this relationship. Through their analyses, the researchers developed a new tool that may help researchers to better understand the conditions that are key to the success of oyster beds. Such a tool could, the team reports, help oyster restoration experts to better deploy their resources, planting new oyster beds only when those beds have good odds of surviving.

That could be important for bringing Maryland’s favorite bivalves back to the Bay, says Lisa Kellogg, an oyster biologist at the Virginia Institute of Marine Science in Gloucester Point. Oyster populations collapsed around the Bay beginning in the 1950s – due to overfishing and disease – and are now at historic lows.

And for several decades, scientists and natural resource managers have been trying to bring back these lost bivalves. The goal has been to build large and self-sustaining oyster habitats, or reefs, along the Bay’s bottom. That’s done by plunking down recycled oyster shells at key locations or by seeding beds with “spat on shell” – oyster larvae that have been grown in a lab and kept until they set onto shells.

“The more efficient and effectively we use the resources that are there, the better off we’ll be and the more we’ll be able to achieve,” Kellogg says.

Knowing the weather is certainly a big part of realizing that efficiency. Winter rains can play havoc with oysters, explains David Kimmel, a plankton ecologist at East Carolina University in Greenville, North Carolina. During a particularly wet season, these weather events flush huge quantities of fresh water down the Susquehanna River and into the Bay. That, in turn, causes salt levels to drop across a large portion of the estuary. The effect lasts until summer when oyster larvae, which begin their lives as free-swimming organisms, are settling down onto shells.

That’s bad for oyster larvae, which are adapted to grow under high salinity conditions. All that new fresh water sends a shock to the young bivalves’ systems and can lead to massive die-offs, says Kimmel, who was previously a researcher at the Horn Point Laboratory of the University of Maryland Center for Environmental Science (UMCES).

The problem is that it’s been hard to predict exactly how much rains in January will affect salinity levels in the summer, when restoration experts begin planting shells for new oyster beds.

To learn more about that relationship, Kimmel and his colleagues turned to a deep well of data. Since 1939, the Maryland Department of Natural Resources has conducted annual surveys of 53 oyster beds around the Bay, scoping out how many oysters, both young and old, are growing at each location. Kimmel’s team compared these measures of abundance over 70 years to annual records of rainfall patterns, called the Palmer Hydrological Drought Index (PHDI.)

As expected, Kimmel’s team found that soggy winters, which correspond to high PHDI, tended to be followed by poor years for young oysters. The effect, however, wasn’t uniform across the Bay. In the middle of the Bay, including at sites in tributaries like the Choptank River, the impact was sizable: there, winter weather seemed to contribute to about one-quarter to one-fifth of the natural ups and downs that oyster populations go through. The impact climbed to nearly 50 percent in the upper Bay, where oysters were likely already living in habitats where salt levels were on the edge of being too fresh.

What’s exciting, Kimmel says, is that understanding the link between rains and fluctuations in oyster numbers may allow natural resource managers to better plan for the future. In other words, if you know the PHDI in a given winter, you can predict what conditions would look like in different regions of the Bay that summer -- whether the estuary would be too fresh or just right for oysters. Then you know whether to plant oysters in those locations. Or not. Think of it as a way to help restoration experts beat the house.

“We’re just trying to capture some of the variability and say, ‘Hey, if you want to put your shell out at this time, then it might be a good idea,’” Kimmel says. The researchers reported their results in January 2014 in the North American Journal of Fisheries Management.

Mitch Tarnowski, a co-author on the study and a shellfish biologist at the Maryland Department of Natural Resources, agrees that the team’s research could be useful in building a more efficient restoration program. “I think it’s got great potential,” says Tarnowski, who heads the department’s efforts to monitor oyster populations in the Bay.

The team’s findings aren’t, however, a perfect crystal ball, says Donald Meritt, the director of the UMCES Horn Point Oyster Hatchery. Under natural conditions, the numbers of oyster larvae that settle onto individual bars in the Bay can oscillate wildly from year to year, with big gains in one season followed by losses the next. Only part of that rise and fall is due to climate. Predators, currents in the estuary, disease, summer storms, and a host of other factors can all prevent young oysters from surviving into adulthood. And because the impacts of many of these factors are still poorly known, predicting how individual oyster bars will fare from year to year becomes a very complicated task.

“Oyster restoration is a complex subject,” says Meritt, who through his work at the hatchery, helps to produce the majority of spat used for restoration projects around the Bay.  “In order to best understand it, more than temperature and salinity must be taken into account.” Kimmel agrees, noting that his team’s calculations don’t capture a wide range of what can happen to young oysters in the Bay.

The Horn Point Hatchery partners with a number of organizations, including the Oyster Recovery Partnership, the Department of Natural Resources, the U.S. National Oceanic and Atmospheric Administration, the Chesapeake Bay Foundation, and the Maryland Watermen’s Association. To read a full list of partners or to learn more about the hatchery’s work, see its website here.

Still, in oyster restoration, every little advantage counts, says Lisa Kellogg. The more information scientists can gather about what makes oyster populations thrive or stumble, the better. “Oyster reef restoration is still in the research and development phase,” she says, and “always should be.”

Photo: Restoration experts use old oyster shells, like these ones pulled up from the Choptank River, to plant new bivalve beds. Credit: Michael Fincham.