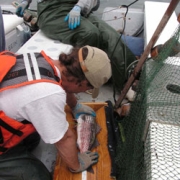 The spread of a bacterial infection called mycobacteriosis among striped bass in the Chesapeake Bay has mostly been a hidden epidemic. Outside of the anglers who pull up the occasional rockfish covered in pink, inflamed sores, Marylanders rarely get the chance to see this disease at work. But recent research suggests that the disease's toll on rockfish in the Bay could be larger than scientists previously thought. In this podcast, Daniel Strain talks to the researchers who follow the path of this illness.

Daniel Strain: Getting into Wolfgang Vogelbein’s lab is serious business.

Wolfgang Vogelbein: This is largely set up to be under negative pressure so that nothing leaves.

DS: On your way in, you pass through two sets of doors. Only one of them can be opened at a time.

WV: And have to hit a special button before that door will open.

DS: Vogelbein is a pathologist at the Virginia Institute of Marine Science in Gloucester Point. Why all the safety measures? He explains that this lab was designed so that scientists could work with organisms that posed a risk to human health. But these days, the precautions may seem like overkill. Vogelbein still studies infectious diseases – just not the human kind.

He focuses on a disease called mycobacteriosis, or myco for short. It’s a bacterial infection that targets fish – namely, striped bass. The disease is a big deal for the fish’s survival, and around the Bay, it runs rampant.

WV: When a fish is one year old the prevalence is about 18 to 20 percent. By five years old, it’s more and than 95 percent.

DS: So nearly every mature striped bass in the estuary has this disease. Humans can’t get sick from eating infected fish. But the stripers aren’t so well off. The bacteria mostly attack their spleens, although diseased fish can also develop nasty ulcers that spread over their scales. The damage takes its toll. When a fish contracts myco, its odds of surviving drop.

David Gauthier: So it has about a 30 percent less chance of surviving a year if you're diseased.

DS: That’s David Gauthier. He’s a colleague of Vogelbein’s out of Old Dominion University in Norfolk, and he’s joined us on a tour of the lab.

No one’s sure how long myco has been a problem in the Bay. Vogelbein first identified the bacteria that causes the disease in the late 1990s. But myco hasn’t received much attention from scientists or the public since. He and Gauthier are trying to change that. They say that the disease may have a much bigger impact on striped bass than researchers previously thought. What’s more, the dangers of myco could be tied to the health of the Chesapeake Bay as a whole.

Outside of his lab, Vogelbein shows me a clue to myco’s deadly nature.

WV: So here I’ve got our system for striped bass. It’s a pretty simple closed system where we're recirculate the water.

DS: This system includes several large tanks that hold hundreds of young striped bass. These silver fish are a few inches long – a size class called fingerlings. Gauthier points out one fish in particular. It’s the runt of the tank and looks darker than the other fish.

DG: We know when a fish turns that color, see this guy, he isn't going to last long.

DG: That’s a good sign that they're not a happy fish.

DS: He’s stressed. Not in the sense that he worries too much. This sort of stress is what happens to a fish when it lives under poor environmental conditions for too long.

WV: There’s a reduction in the growth of the animal, in its reproductive capacity, in its ability to respond to infections.

DS: Or it has trouble fighting off diseases like myco. The problem for striped bass is that the Chesapeake Bay is an inherently stressful place for a fish to live. Every summer, huge stretches of water in the estuary are deprived of oxygen. That’s a condition called hypoxia. These low-oxygen areas, or dead zones, are the result of humans dumping too much nitrogen and phosphorus into the estuary.

The big question is whether striped bass can live with all that stress.

WV: There is some capacity to adapt to a new level of insult, but there’s a limit to that.

DS: To get a better sense of that limit, the researchers recently ran a study. They took sick and healthy fish and then tried to measure their metabolic capacity – or how much oxygen they consumed while resting and after swimming hard. Surprisingly, the team found that the fish with the disease seemed just as healthy as the fish without.

But that was under normal living conditions. The researchers also raised fish in stressful environments. They decreased the amount of oxygen available to the fish, and they upped the water temperatures – conditions that mimic the warm waters and low oxygen supplies found in parts of the Bay during summer. The fish that Vogelbein infected with myco now faced a triple whammy of threats to their health: low oxygen, warm water, and disease.

DG: You put all three of them together and that’s when you start seeing these major metabolic deficits.

DS: In other words, the fish seem to be able to handle one stressful condition without too much trouble. But when they face all three stresses at once…

DG: This seems to be able to compound the problem to impact them metabolically and, perhaps, make them more prone to more rapid progression of the disease.

DS: Out in the wild, it’s not clear if the stress of living in a tough environment is actually making fish more susceptible to myco. Right now, striped bass in the Bay seem to be doing fine. Their numbers are above the targets set by regulatory agencies.

But one thing is clear, Gauthier says.

DG: Anytime you have something that's increasing the overall natural mortality of the fish population, it's of concern.

DS: Which is all the more reason to reduce the nutrients flowing to the Chesapeake Bay -- the nutrients that help to create low oxygen levels in the water. Think of it as stress reduction for our striped bass.