Satellites Could Offer Alerts, Tracking of Harmful Algae in the Bay 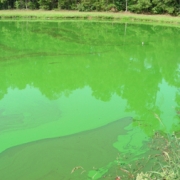 In July 2011, an unnatural-looking, bright green slick of algae spread along nearly 18 miles of the Potomac River and lasted for nearly two months. The algae were Microcystis aueruginosa, bacteria whose toxin can kill fish and give people skin irritation, allergic reactions, and stomach disorders.

Fortunately this bloom occurred downstream of Washington, D.C.’s municipal water intakes. But blooms of these and other harmful algae happen with some regularity in the Chesapeake Bay and Mid-Atlantic coastal waters, especially in summer. During these months, warm water temperatures and excess nutrients like nitrogen and phosphorus combine to create favorable conditions for the explosive growth of algae. And during the past two decades, these blooms have threatened Bay fisheries and caused officials to temporarily close many public beaches.

Detecting harmful algal blooms early continues to be a key concern because they often go unnoticed until they have grown large enough to threaten fish populations and human health. To spot and track harmful blooms in the Bay more quickly, scientists and natural-resource managers are considering taking a new approach: analyzing images from an eye in the sky, a satellite-mounted sensor.

That technology could help authorities know when to issue timely alerts to protect public health and shellfish aquaculture operations, speakers said at an April workshop focused on this approach. The workshop was sponsored by Maryland Sea Grant and a federal agency, the National Oceanic and Atmospheric Administration (NOAA), and brought together state and federal natural-resource managers and scientists from Maryland, Virginia, and Delaware.

For more than a decade, satellite-borne NOAA sensors have collected images of the Chesapeake Bay and other locations in the United States. The satellite data can indicate the presence of large masses of chlorophyll floating on the Bay’s surface, which could indicate a harmful bloom. But the data have so far not been used to help public-health and natural-resource managers detect harmful blooms in the Bay.

NOAA data have been used for this purpose elsewhere. Using satellite data and computer models, NOAA has provided forecasts of likely locations for blooms of cyanobacteria — a class of microbes of which Microcystis is one member — up to three days in advance for Lake Erie and parts of the Florida coast. Now NOAA is interested in developing similar models to use in the Chesapeake Bay, said Richard Stumpf, a marine scientist at NOAA who analyzes the satellite data. The proposed model would ultimately combine satellite data and ground-level observations of blooms with hydrodynamic models (which capture the physical conditions, such as water temperature and currents, of surface water bodies) to identify blooms and predict their spread in the Bay.

Public officials could use satellite information to direct their workers where to take water samples to confirm that the bloom contains harmful species of algae. On-the-ground checking is necessary because the computer model could create false positives (forecasting blooms where none exist.) In addition, it's important to know which species of algae are in the water is important because some HAB species — such as Prorocentrum minimum, which creates blooms called “mahogany tides” — are less harmful than others. Using only the satellite images could result in misidentifying the health risk from a bloom because Prorocentrum m. blooms are indistinguishable in these images from blooms caused by Karlodinium veneficum, a species that kills fish in the Bay and Maryland’s coastal bays.

If a harmful bloom were confirmed on the ground, local officials could shut intakes to municipal water systems in affected waterways and could issue public-health warnings at public beaches and waterside areas. The location-specific information could also be used to warn operators of onshore oyster aquaculture facilities — operations that may take in Bay water — to temporarily shut down their intake valves to avoid pumping in the algae toxin.

Satellite images "will be very helpful for us to detect and track harmful algal blooms in the Bay," said Cathy Wazniak, environmental program manager for the Maryland Department of Natural Resources. The images would complement the water sampling regularly conducted by the department's staff and by its automated monitoring stations in the Chesapeake. These ground-based sources cover only a portion of the Bay, and the department recently reduced the frequency of water sampling by staff because of budget constraints, she said. The satellite images can cover all of the Bay every two or three days.

Participants at the April workshop also discussed obstacles to making use of the satellite images.

One is a temporary shortage of the most useful image data. The satellite-borne sensor that provided the best pictures of Chesapeake Bay algal blooms failed in 2012. Orbiting about 500 miles above the earth, the sensor, called the Medium Resolution Imaging Spectrometer or MERIS, provided images with a relatively high level of resolution, areas 300 by 300 meters square. Sensors on other satellites continue to record images of the Bay, but they are not designed to record in detail the telltale emissions of light from the kinds of algae that live in coastal waters. Or their spatial resolution is not discriminating enough to see harmful algal blooms in the Chesapeake Bay.

The gap in Chesapeake-specific data is expected to end in 2014 or 2015 when a new European satellite, Sentinel 3, is launched bearing a new sensor with capabilities similar to those of the defunct MERIS.

Even so, such sensors have limitations for detecting harmful blooms in some parts of the Bay, especially its tributaries. That is because some species of algae, like Microcystis, are adapted to relatively fresh water and so tend to bloom in the Bay's less-salty tributaries. In some cases, a sensor image of an area 300 meters square within a relatively narrow tributary records some portion of land on the tributary’s banks. This eliminates the value of that image for detecting harmful algae: the river bank contains trees and other vegetation that together contain a large amount of chlorophyll that overwhelms the signal from the smaller amount of chlorophyll contained in algae floating in the tributary. The algal bloom is most easily detected if the satellite image shows the water surface only.

Stumpf of NOAA said that his agency is working on a technical fix for the Chesapeake Bay data. “That’s a clear issue we have to solve,” he said.

Workshop participants also called for a computer model that could help public officials predict whether the algae contained in a particular bloom are harmful. Stumpf said the model could combine satellite data with information about Bay locations in which particular harmful species have bloomed in the past. Such blooms may recur in those locations because algae are adapted to certain ranges of salinity and temperature. Data on salinity and temperature are currently collected by a network of monitoring stations in the Chesapeake and its tributaries. So that information, merged with real-time satellite data, could help managers to prioritize where to take water samples to confirm the presence of a harmful bloom.

A working group will follow up on the workshop to develop tools that make use of remote sensing data in anticipation of the Sentinel-3 satellite launch. Among these tools is a public website that can display near-real-time satellite data about algal blooms in the Chesapeake Bay and other U.S. regions. NOAA has developed a prototype of this website, the Harmful Algal Bloom Data Viewer.

Another tool currently used in Florida and Lake Erie is a weekly printed bulletin that describes new data about algal blooms. Workshop participants said a bulletin would also be useful for the Chesapeake Bay. The publication would be sent to resource managers and other interested groups.

To report harmful algal blooms to the Maryland Department of Natural Resources, Tidewater Ecosystem Assessment Division, call (410) 260-8630 during normal business hours. If there are fish kills, fish health, or human health concerns associated with the observed algal bloom, contact the Fish Health Hotline at (877) 224-7229 at any time.