Road Deicers Could Be Making the Region Too Salty 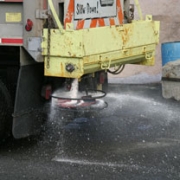 As far as snow storms go, 2013 hasn’t exactly been the winter of our discontent around the Chesapeake Bay region. Still, even the threat of snow and ice in recent weeks has sent highway crews out to spread road salts. On asphalt across Maryland, you can spot the white residue from these “deicers.” They make winter driving safer but could also present a growing threat to the environment and to the quality of drinking water sources, some scientists say.

The problem stems from those same minerals that are in your tabletop salt shakers. Research suggests that sodium chloride, the most common ingredient in deicers, may have begun to accumulate in the environment largely because of runoff tinged with road salts. In some cases, the impacts can be big: high concentrations of salt can affect the health of Maryland’s most sensitive animals, such as many amphibians, including the common spotted salamander. And even at relatively low levels, road salts can substantially change the makeup of communities living in freshwater habitats, such as streams or ponds.

Joel Snodgrass, an ecologist at Towson University, studies how road salts travel through and impact the environment. When he was a young student in the 1990s, he learned the common maxim that “the solution to pollution is dilution.” In other words, salts may be harmful, but when they’re mixed with enough fresh water, they should become too diluted to do much harm. But after decades of heavy use, he says, we may have “run out of diluting power.”

That alarm was sounded, in part, by a 2005 report published in the Proceedings of the National Academy of Sciences by a team led by Sujay Kaushal. A biogeochemist at the University of Maryland at College Park, Kaushal and his colleagues explored how salt levels were changing in streams across the Atlantic Coast. Their study sites included eight in rural and developed areas of Baltimore County.

Salt concentrations in much of Baltimore City’s freshwater supply, which is drawn from rural streams to the west, had crept up noticeably since the 1980s, the team found. Salt levels in the city’s water supply were still well below the recommended limit set by the U.S. Environmental Protection Agency (EPA). That limit is 250 milligrams of salt per liter of water (just salty enough to taste but much less salty than sea water). Nevertheless, the salt levels mattered because studies indicate that many Americans consume more salt in their diets than is healthy. That consumption is linked to health problems like high blood pressure.

While those salt levels were still low, they were climbing steadily and likely haven’t stopped since that initial study. And if deicer use remains high, “they’re not going to decrease,” Kaushal says.

He and his colleagues also found that many streams stayed salty well into the summer, long after highway crews had stopped spreading salt. That suggests that excess salts in the environment were likely being stored in groundwater during the winter and slowly released in the spring. “Even if you quit applying salt” for good, he says, “the salt would remain elevated in these watershed because it takes so long to flush out.” In some cases, Kaushal says, it may take decades.

Such trends could be bad for people but may be worse for some plants and animals. That’s where Nancy Karraker, an ecologist at the University of Rhode Island, comes in. She grew up in Arizona, so she hadn’t seen road salts in use until, as a young grad student, she took a trip to the Adirondack Mountains in upstate New York.  “I followed this snow plow that was spewing these crystals behind it,” she says. “I thought,‘Oh my gosh, that must be road salt.’ ” Then she had another thought: what was all that salt doing to the freshwater nearby?

Specifically, Karraker was worried about the effect on amphibians, including frogs and salamanders. Their numbers are already declining worldwide because of a number of different factors. Many amphibians living in both the Adirondacks and in Maryland breed and lay their eggs in seasonal, or vernal pools. Those same pools, however, have been steadily paved over to make way for development. And, making matters worse, many amphibians tend to be highly sensitive to small changes in the chemistry of the remaining pools because of their porous skin.

Karraker’s laboratory studies seemed to back up her worries that road salt could be adding more stress to the lives of already stressed-out animals. She and her colleagues raised eggs from a common type of amphibian, called the spotted salamander (Ambystoma maculatum), in a range of briny waters – similar to the salt levels she had measured in real pools in the Adirondacks. Eggs stored in the saltiest solutions, about 945 milligrams of salt per liter, lost a third of their weight, the scientists reported in 2011 in the journal Environmental Pollution. It was a bit like how a slug will shrivel up when kids sprinkle it with salt. What’s more, eggs that grew in super-salty solutions also tended to hatch living salamanders at much lower rates than eggs raised in fresh water.

Even when salts don’t kill amphibians outright, they can still have large consequences for entire aquatic communities. But those effects can be hard to see unless you look closely like Joel Snodgrass of Towson University has. He’s worked on a series of studies focusing on what happens to the plants and animals living in stormwater ponds when their environment turns salty.

Found in or around most housing developments, stormwater ponds are artificial pools designed to collect as much rainwater as they can. But as a side effect, Snodgrass says, they also collect salts. A lot of salts. That’s troubling because such ponds have become important homes for amphibians and other aquatic animals – especially those who’ve lost their natural habitats, such as Karraker’s mountain pools, to human development.

In a recent study, Snodgrass and his colleagues set out to conduct a simple test. They built small pools meant to resemble real-life stormwater ponds, right down to the organisms living inside. In some pools, they added extra salt. Strangely enough, gray  tree frog (Hyla versicolor) tadpoles seemed to flourish in the brinier pools – or those kept at salt concentrations of about 645 milligrams per liter. The frogs-to-be grew faster and matured quicker than their compatriots that the scientists raised in freshwater pools.

The success of frog larvae, however, didn’t mean the pond ecosystems were healthy. In fact, the tadpoles seemed to thrive not because they liked the extra salt but because the high concentrations killed off certain types of insect larvae that were the frogs’ main rivals for food. The tadpoles were then free to binge on microscopic algae. So while the frogs seemed to be benefitting from the salts, the loss of insect larvae from the pond was likely not a blessing for the whole ecosystem. And, Snodgrass adds, whatever success the frogs were having would likely disappear if salt concentrations continued to inch higher. The study – which was headed by Robin Van Meter, a graduate student at the University of Maryland, Baltimore County -- was published in 2011 in the journal Wetlands.

While road salts aren’t regulated on a national level, some states have taken note of studies like these. In 2010, the Maryland state legislature directed the State Highway Administration to draft a plan for managing road salt use with the goal of better protecting the environment and drinking water. That plan, published in 2011, included a range of recommendations meant to limit the use of deicers while still keeping drivers safe. In some cases, that means portion control or using just enough salts to melt the snowfall from a particular storm and nothing extra.

Some manufacturers have also begun to produce non-salt deicers made from beet molasses, which pose fewer risks to the environment.

Based on the current research, road salts may seem like less of a threat to the Chesapeake Bay watershed than other environmental pollutants, such as excess nitrogen or phosphorus. But, in this case, Snodgrass says, humans have the opportunity to take action before drinking water sources become undrinkable and species lose more habitats. “If we don’t, we’re going to be facing some big problems,” he says.

It’s something to think about the next time the Chesapeake region prepares for a big snowy storm.

Is salt accumulating in your drinking-water supply? Marylanders can find reported information on the quality of their water, including concentrations of chlorides (which come from salts) on this Environmental Protection Agency website. Residents of other states can look here.