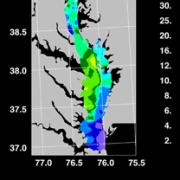 For 25 years, scientist Larry Harding and his colleagues regularly flew small airplanes over the Chesapeake Bay as they amassed an unparalleled collection of scientific data. In more than 500 flights, the researchers pointed sensors at the Bay’s surface to measure the distribution and makeup of phytoplankton, a key indicator of the estuary’s condition.

Phytoplankton are the algae that rapidly bloom in summer months in the Bay, eventually robbing its waters of oxygen and creating “dead zones” with little or no marine life. Harding’s efforts tracked the ups and downs of these potentially harmful blooms by tracking chlorophyll – an important pigment carried by photosynthetic organisms – in the estuary. Many academic researchers have used Harding’s data to study this and other aspects of the Bay’s ecology.

But in September, one final flight crossed the Bay. The Chesapeake Bay Remote Sensing Program has ended because of a lack of funding. No other organization plans to continue gathering this kind of remote sensing data.

“It’s very disappointing to lose this program,” says Dave Miller, an oceanographer at the Naval Research Laboratory who worked with Harding on the project. “It will be a loss for the research community and scientists who study phytoplankton in the Bay.”

It’s certainly clear that the program had a long legacy in contributing to Bay science, says Richard Stumpf, a marine scientist at the U.S. National Oceanic and Atmospheric Administration. “For a long time,” he says, Harding’s flights provided “the best remotely sensed chlorophyll data that we could get.”

In addition to his role as pilot, Harding, was a researcher at the Horn Point Laboratory of the University of Maryland Center for Environmental Science when he founded the remote sensing program in 1989. In 2011, he returned to his native California to be closer to family, and is now an adjunct professor at the University of California, Los Angeles. He had continued to work on the Chesapeake remote sensing program from there.

But continuing the funding had become more difficult. “It’s always difficult to get funding just for monitoring,” Harding says. “We had to keep coming up with new scientific purposes for the program.”

“Larry was able to cobble together funding this year to run the program, but he put a lot of effort into raising those funds,” says Miller of the Naval Research Laboratory. “It’s just not something he can continue to do.”

Miller began working with Harding on the remote sensing program in 1997, and it became a large part of his dissertation work. He continues to work with the data as an oceanographer.

In the remote sensing program, aircraft flew up to 24 times a year at a low altitude over the Bay, about 500 feet. Sensors mounted on the aircraft measured wavelengths of light reflected from the Bay’s surface. In particular, the palette of blues and greens yielded information about the density and composition of algal blooms in the Bay.

Those data are important because phytoplankton are what scientists call primary producers -- they exist at the base of the Bay’s food chain and provide food for a variety of grazers (animals like small fishes) higher up the chain.

In addition, the program’s data have informed research about high levels of nitrogen in the Bay that drive the growth of algae. Because of such excess nutrients, blamed on human sources, far more phytoplankton exists in the Bay today than when scientists began measuring algae in the 1950s. EPA staff members in the Chesapeake Bay Program Office have used the data to help set water quality standards for the Bay watershed.

And, importantly, Harding’s work set the groundwork for using diverse remote sensing tools like satellites to gather information about algae blooms in estuaries like the Chesapeake, Stumpf says. Through their flights, the scientist and his colleagues developed intricate methods of calculating the abundance of phytoplankton in Bay waters. Today, other researchers have built on the team’s techniques to monitor huge growths of algae in estuaries from space.

“Larry most importantly demonstrated that you can actually do this,” Stumpf says. “He was able to turn around data very quickly from an airplane and that’s a very hard concept to pull off.”

Stumpf notes that remote sensing is crucial to understanding algae blooms in the Bay. While many scientists gather data on phytoplankton from boats, such efforts are time consuming and cannot cover areas as large as those traversed by the flights or satellites.

The flight data make up “a data set that’s incredibly unique,” says Miller. “Just because it’s not being gathered anymore, [however], doesn’t mean that we won’t be using it.” Miller explains that advancements in technology since the program began will allow him and others to reanalyze the data to make it even more accurate. Based on the time of day and altitude of each flight, researchers can make corrections to account for atmospheric distortion. Even for a flight at 500 feet, “that small amount of atmosphere could have an effect on the data we gathered,” Miller said.

“We had a lot of people who helped us out and I’m satisfied that we made it to 25 years,” Harding said. “It was a good, long run.”

For a detailed description of remote sensing in the Chesapeake Bay and Harding’s work, see an issue of Maryland Sea Grant’s staff-written magazine, Chesapeake Quarterly, “Seeing The Big Picture — Monitoring the Bay from the Air.”