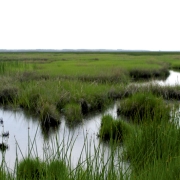 WILLIAMSBURG, Va. — Maryland Department of the Environment Secretary Ben Grumbles and U.S. Rep. Rob Wittman of the 1st District of Virginia will join a cross-section of scientists, policy-makers, city officials, regulators, and leaders of non-profit groups from both states at the first-ever Marsh Resilience Summit Feb. 5 and 6 at the Williamsburg Woodlands Hotel.

The summit is a collaboration among the Virginia Institute of Marine Science, University of Maryland Center for Environmental Science, Maryland Sea Grant, NOAA, and various federal and state agencies and nonprofit organizations to put forward the best scientific findings and policy recommendations to protect coastal marshes. It is being organized by the Chesapeake Bay Sentinel Site Cooperative, which is a partnership that includes hundreds of monitoring sites around the Chesapeake Bay that measure and evaluate marsh health. Funded by Maryland Sea Grant, the National Sea Grant Office, and the National Oceans Service, the Cooperative is focused on collecting data to identify the marshes that may be in jeopardy, and working with policy-makers to determine the best methods of protection.

Marshes are crucial in the effort to protect both states from sea-level rise, coastal inundation, and erosion — major issues in the United States’ largest estuary as well as in other parts of the country, including the Gulf of Mexico and California. The local scientific observations indicate the Eastern Shore of both states is losing marshes at an alarming rate, further jeopardizing coastal communities. In addition, many plants and animals rely on marshes for habitat; several bird species are already imperiled because of marsh loss.

“In the face of sea level rise projections, we need a dialogue between scientists, managers, and decision-makers about how to respond to changes in marshes and preserve the marshes themselves,” said Taryn Sudol, Chesapeake Bay Sentinel Site Cooperative Coordinator. “Marshes provide habitat, they act as storm surge buffers, they sequester carbon, and improve water quality. By bringing together scientists, managers, city officials, and the non-profit community, we can better understand how marshes work and how to protect them for the future.”

“From both economic and ecological perspectives, tidal marshes rank among the world’s most valued ecosystems, and within the Bay, one of the most threatened due to coastal development and elevated sea level rise. Faced with these challenges, the Marsh Resilience Summit provides an opportunity for Bay-state experts to exchange ideas, identify information needs, and set future direction on integrating science into resource management, planning, and policy actions to enhance marsh sustainability within Chesapeake Bay.”

The topics for discussion include: marsh migration, how dredge material and sediments can aid in marsh restoration, and lessons learned from marsh restoration after the Deepwater Horizon Oil Spill. For a full agenda, click here. To register for the summit, contact Taryn Sudol, 301-405-6378.