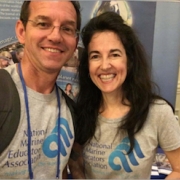 This advertisement popped into my mind, and I had the same head-thumping reaction, when I thought of the way Maryland Sea Grant and the National Marine Educators Association (NMEA) enrich and enhance each other like peanut butter and chocolate. Founded just a year apart – the National Marine Educators Association in 1976 and Maryland Sea Grant in 1977 – both organizations have histories rich in education, research, and public outreach.

NMEA is a national organization of members who include teachers, informal educators, university professors, students, and people from other countries working together to enhance public understanding and preservation of our freshwater and marine ecosystems. NMEA has 17 regional chapters that support and promote nationwide initiatives in education and conservation.

So how did these two organizations bump into each other? For many years, NMEA’s national office was located in Ocean Springs, Mississippi. When NMEA needed a new home in 2012, a request for proposals was issued, and peanut butter and chocolate came together when Maryland Sea Grant became the host of NMEA’s national office in 2013. What stands out to me during this transition period was the way NMEA arrived at Maryland Sea Grant’s doorstep. UPS plunked down in our reception area dozens of boxes, cartons, and containers filled with NMEA history, ready to be unpacked, sifted through, re-filed, and re-organized in their new living quarters. Around this time, NMEA upgraded to a new digital membership database, so things were hopping at the new national office.

A walk through the hallway of the Maryland Sea Grant office today illustrates how seamless the transition was and continues to be. In our reception area, one of the first things you’ll notice is an area rug with an ocean blue background and schools of fish in the foreground. Continue down the hallway and you’ll see gorgeous bay-themed artwork by local artists as well as various photos of aquatic plants and sea creatures. You’ll hear conversations about aquaculture, education, and ocean conservation. On an especially busy day, you might hear the sounds of video editing and snippets of recorded interviews with scientists, watermen, teachers, and Bay pilots on topics like installing a rain garden and seafood safety technology.

Off to one side of the hallway is the NMEA national office. In square feet, the national office consists of one 10-by-12-foot room, half of another room, and some storage space in College Park and Baltimore. Nevertheless, the small space doesn’t affect NMEA’s ability to continue the work that for decades has been done with dedication and enthusiasm. Just like chocolate and peanut butter are perfect companions, Maryland Sea Grant and NMEA are a sweet combination.