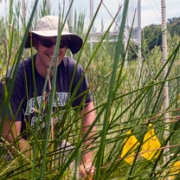 Part 1 of this series examined how wetlands might take up carbon dioxide in the future as greenhouse gas levels in the atmosphere continue to rise. In this second installment, Daniel Strain returns to Kirkpatrick Marsh to explore one of the biggest threats to wetlands today: sea level rise. With sea levels around the Chesapeake Bay expected to rise by about two feet by 2050, local marshes are facing a water-logged future. But new research suggests that one invasive plant could help these communities to stay high and dry.

Daniel Strain: Walk deep into the middle of a wetland, and there are some sounds that you might expect to hear: the buzz of insects, maybe, or a great blue heron flapping its wings overhead. Country music probably doesn’t make the list. But then, Kirkpatrick Marsh isn’t an ordinary wetland.

Patrick Megonigal: We’ll walk down to the end of the boardwalk here.

DS: Patrick Megonigal is giving me a tour of Kirkpatrick Marsh, a jungle-like wetland that sits on the Rhode River in Maryland, not too far from a much bigger body of water.

PM: It is a brackish tidal marsh. It’s on the shore of the Chesapeake Bay. And it’s been the subject of global change research for about 30 years – since 1986.

DS: It’s that last part that brings Megonigal – a biogeochemist at the Smithsonian Environmental Research Center – here today. He’s one of about a dozen researchers working on Kirkpatrick Marsh this afternoon – hence the radio, playing some country music to help the time go by.

The scene seems laid-back, but Megonigal has some serious things on his mind: most of them revolve around sea level rise. He stops at a spot in the wetland where muddy water has collected into a pool.

Here, it’s a good bet to expect more flooding. Researchers estimate that water levels on the Bay will rise by about two feet by 2050. That’s mostly because of climate change driven by human activities.

And it’s a big deal for local wetlands. Because marshes are anchored in the water, even small changes to the surrounding sea level don’t just make plants grow less – they can wash away entire wetland communities. Many marshes on the Bay and elsewhere have already begun to disappear.

PM: When we say they disappear, they convert to open water. Essentially, the plants drown, and when they drown, well, they’re gone.

DS: But there may be a way for this marsh to survive. Wetlands can outrun rising waters.

PM: In a marsh like this, when the elevation increases, that means the volume of soil is increasing.

DS: Megonigal explains that wetlands like this one accumulate new layers of soil over time. Much of that soil comes from dead and decomposing plants that once grew on the marsh.  It’s a bit like adding food waste to a compost pile. And the end result is that marshes rise up out of the water – very slowly.

Today, much of Kirkpatrick Marsh increases about three millimeters in elevation annually. Whether or not the marsh as a whole will be able to climb fast enough – faster than the rise of sea levels — isn’t clear. But Megonigal and his colleagues suggest that this marsh might get help from an unlikely ally.

Thomas Mozdzer (ambient): So if you guys do twelve, whatever you need. Everybody else could go back to sorting the plants. That would be awesome. Then we’d be done.

DS: Thomas Mozdzer has been out in the sun on Kirkpatrick Marsh for most of the day along with his team of student research assistants. He’s an ecologist at Bryn Mawr College in Pennsylvania and a colleague of Megonigal’s. Today, he’s collecting samples of grasses.

TM: So this is Spartina patens. And this year, we seem to be seeing a little bit more Distichlis spicata.

DS: Those are two types of grasses that are native to wetlands around the Chesapeake Bay — also known as saltmeadow cordgrass and saltgrass. But Mozdzer also has his eye on plants that aren’t from around here. Phragmites australis, known as the common reed, was brought to the United States from Europe in the late 1800s. Over the last few decades, it’s begun to invade local wetlands at a fast clip.

TM: Back in 1972, there were only two patches of Phragmites, and now the wetland has many, many pockets of Phragmites all over the place, and they seem to be expanding more every year.

DS: The plant isn’t hard to spot. At this point in the season, it’s mint-green and taller than Mozdzer by several feet. Many natural resource managers consider it a menace, in part because the reed displaces native marsh plants.

But Phragmites might not be as harmful as many think, especially when you consider sea level rise. To make the point, Mozdzer shows me several custom-built greenhouses plunked into the middle of the marsh. They are part of an experiment funded partly by Maryland Sea Grant. These structures look like oversized telephone booths. Inside them, plants are growing. And in some of the chambers, Mozdzer’s team has tried to simulate the growing conditions that these plants might face in the future. We look inside one chamber where researchers have roughly doubled the concentration of carbon dioxide gas, or CO2

TM: That one is actually an elevated CO2. And, initially, it doesn’t look like it has a lot of stems, but it has actually over 100 stems of Phragmites in there.

DS: The Phragmites is growing at an impressive rate, Mozdzer says. The elevated concentration of CO2 in this chamber is meant to represent what the atmosphere might look like decades into the future — if humans continue to pump greenhouse gases into the air. Those same gases are the primary cause of climate change.

Many plants, including Mozdzer’s grasses, grow better if you give them more CO2 — it’s an important source of energy for all green life. But Phragmites does really well. And if you give it nitrogen, a common plant nutrient, it does even better.

TM: We can see it in our chambers. When we add nitrogen, we have a very explosive growth.

DS: Which may actually be a good thing as far as sea level rise goes, says Patrick Megonigal.

Patrick Megonigal: It’s certainly not good for plant species diversity. But maybe it is good from the perspective of coping with accelerating sea level rise.

DS: To put it differently, because Phragmites grows so well, it builds up a lot of extra plant material on this wetland – or a lot of compost. Some of that compost will become new soil and, the scientists suspect, could help Kirkpatrick Marsh to rise up faster than before – maybe even fast enough to escape from rising sea levels.

Here on the marsh, Megonigal is testing just how helpful Phragmites might be in that race. He wouldn’t recommend that wetland managers go around planting this reed. But, he says it’s possible that Phragmites, like many invasive species, may have both positive and negative impacts on Bay ecosystems – at the same time.

PM: So like many things, this invasive species is a mixed bag.

DS: Now that’s something you could write a country song about.

Read more about the Maryland Sea Grant research project about phragmites mentioned in this article.