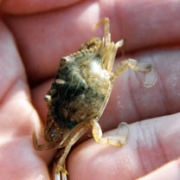 The Beatles famously sang about escaping to an octopus’s garden to rest. Crabs on the Chesapeake Bay, however, choose a different hideaway beneath the waves: beds of bay grasses.

Pick through the thick clumps of eelgrass (Zostera marina) and widgeon grass (Ruppia maritima) that dot the shores of the lower Bay in the fall, and you’ll probably find a few small crabs tucked inside -- usually with shells no wider than three centimeters from side to side, or roughly the size of a half-dollar.

Now, a new study shows that this relationship between crabs and bay grasses isn’t uniform. Juvenile crabs tend to cluster in greater numbers in healthy grass beds, rather than in habitats that are sparsely covered, reports a team of researchers out of Virginia. The results hint at the important role that these aquatic ecosystems play in the lives of blue crabs.

The notion that bay-grass beds could be havens for young crabs isn’t new. Like the tranquil garden described in tune by the Fab Four, these habitats seem to be ideal shelters for jimmies and sooks-to-be. Every year around the fall, ocean currents sweep young crabs -- in this stage, known as megalopae -- into the Bay.

Scientists have long known that you can find a lot of young crabs in aquatic plant beds, an observation that has earned them a reputation as crab “nurseries.” But researchers have yet to show, on a Baywide level, whether these animals prefer some nurseries over others. In other words, are habitats with lots of plants better for crabs than locales that are more barren? Some research studies have addressed the question in narrow patches of aquatic habitat.

In one study published in 1996, researchers used small tethers to tie juvenile crabs in place across bay-grass beds in a small region of the York River in Virginia. Some of these beds were overflowing with plants, while others were much less green. The smallest juveniles, or those less than a centimeter-and-a-half wide, were more likely to survive when they were able to hunker down under the fronds of aquatic plants, the study showed.

The boon provided by dense bay-grass beds potentially comes down to two factors, says Gina Ralph, a graduate student at the Virginia Institute of Marine Science and a lead author of the current study. Grass beds are filled with hiding places for tiny crabs but are also home to a wide array of even smaller crustaceans and other animals. In other words, crab food. As Ralph puts it, “The little crabs can hide from predators in the seagrass beds, and there is typically more prey” for the crabs to eat there.

Ralph, however, wanted to explore this idea on a large scale. She and a team of researchers traveled to 43 sites in 2007 and 61 in 2008. These locales stretched from near the mouth of the Bay in Virginia north to Smith Island and the town of Crisfield in Maryland -- which is about as far north as megalopae likely get. The lower Bay also holds roughly two-thirds of the estuary’s underwater vegetation, a large portion of it concentrated in Tangier Sound. Using a vacuum-like apparatus, the team sucked up all the critters living in small patches at these sites.

Over both years, Ralph found an average of about 24 crabs per square meter of Bay bottom. That’s probably fewer than you would see today -- 2007 and 2008 were bad seasons for crabs, according to regular monitoring data taken by scientists out of Maryland and Virginia. In each year, the number of females large enough to reproduce fell below 100 million in the Bay, as opposed to the 147 million counted in 2013.

Despite that decline, Ralph still found interesting patterns in where juvenile crustaceans were found. Location did seem to matter, her team found. For reasons that are still unclear, juveniles grouped together at higher densities in aquatic habitats on the Western Shore than on the Eastern Shore.

But Ralph’s data also suggested that young crustaceans aren’t merely passive travelers, going wherever the currents take them. Like teenagers cramming into a rock concert, these animals clustered together in quality aquatic habitats -- or stretches of the Bay bottom where plants were thriving.

Ralph’s team rated how lush and thick the grass beds were by recording what percentage of the Bay bottom they covered in a certain area. For every 10 percent increase in that coverage, the densities of juvenile crabs jumped up by as much as 30 percent. The researchers published their results in August 2013 in the journal Marine Ecology Progress Series.

How closely the Bay’s blue crab stock as a whole is tied to the health of bay-grass beds isn’t clear, Ralph says. Unlike the earlier study where crabs were tethered to their habitats, Ralph’s survey wasn’t designed to test whether or not aquatic plants help young crabs survive to adulthood. That question is potentially important to fisheries management in the region — if young crabs depend on thick grass beds for their survival, then the state of eelgrasses and widgeon grasses in the estuary could play a role in the ups and downs of the fishery. On the large scale, however, “it’s just really hard to actually prove that,” she says.

Michael Wilberg, a fisheries scientist who was not involved in this study, agrees. He says that for logistical reasons, it’s difficult to link the growth and decline of fish or shellfish populations to the quality of their habitats.

“There’s few if any studies that link…habitat characteristics to population dynamics,” says Wilberg, of the University of Maryland Center for Environmental Science’s Chesapeake Biological Laboratory. “It’s a tough question to look at.” In research funded by Maryland Sea Grant, he and colleagues are exploring new strategies for managing the Bay’s blue crab fishery.

Still, he notes, Ralph and her colleagues uncovered interesting patterns in the spread of young crabs throughout the estuary. “I think they did a pretty nice study,” he says. The range and number of sites that the team surveyed is “something you don’t see very often, particularly for marine studies of the effect of habitats on organisms.”

Ralph, for her part, is developing computer simulations that could help to predict the impact of aquatic habitats on the Bay’s populations of blue crabs.

In the end, it’s about finding the best place for these crustaceans to escape to -- the Bay’s own octopus’s garden.