How Atlantic Communities Are Preparing for Climate Change

Adapting to climate change can be expensive, but some communities on the Atlantic Coast are finding ways to curb those costs. A new report provides a series of case studies detailing how. 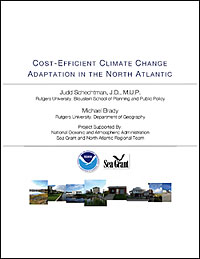 The year-long study, "Cost-Efficient Climate Change Adaptation in the North Atlantic," was designed to seek out the best adaptation strategies that Atlantic towns and cities were putting into effect. The goal was to share these efforts with other communities.

Some of these adaptation efforts include building tall sand dunes to shield coastal towns from crashing waves and flooding. Other municipalities have restricted how close homes, hotels, and other beachside buildings can be to the water, keeping new development safe from sea level rise

When selecting the cities and towns listed in the final report, the authors chose municipalities that demonstrated planning efforts in each of these areas: research, education and outreach, laws and policies, infrastructure, and cost-efficiency.

“With so much inherent geophysical, cultural, socioeconomic, and political variation, there is no one-size-fits-all magic solution for communities.  But at the same time, there is no reason to reinvent the wheel in every community,” Peg Van Patten, communications director at Connecticut Sea Grant, wrote.

There is also an interactive map that shows the 34 municipalities and provides links to learn more about each location.

Notable adaptations mentioned in the report about Maryland municipalities include: