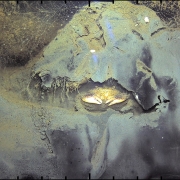 New Research Explores How Low-oxygen Water Kills Some of the Bay’s Small, and Often Overlooked, Organisms

With apologies to pigs, and the character Pigpen of Peanuts comics fame, not everyone loves to wallow in mud. But deep below the surface of the Chesapeake Bay, you can find a habitat full of creatures that don’t mind getting mucky. Here on the estuary’s bottom, worms, clams, and crustaceans burrow down into the sediment, sometimes sticking their noses out to catch passing morsels.

Such bottom-dwelling, or “benthic,” organisms are more than just mud loving, scientists say. They’re also a crucial piece of the Bay ecosystem, making up a big part of the diet of swimming fish and other animals. Those same benthic critters, however, are also vulnerable to human impacts on the Bay, including dead zones -- huge volumes of water that carry little to no oxygen and build up every summer in the middle of the estuary. Humans give rise to these zones by dumping excess nutrients, such as nitrogen and phosphorus, into the Chesapeake Bay and its tributaries.

Now, new research is showing just how big a toll yearly dead zones take on the Bay’s benthic community. Recent estimates suggest that up to a third of all benthic life is being wiped out in the estuary every summer because of low oxygen conditions. Such research efforts could help natural resource managers to better understand the impacts of poor water quality on the entire Chesapeake food web, from big fish down to little worms.

And those worms are pretty common. Scoop up a glob of dark sediment from tens of feet below the Chesapeake Bay, and there’s a good chance you’ll find a lot of a class of worms called polychaetes. These critters, which mostly live in watery environments, are known for the long bristles that grow out from their sides, making them look a bit like feathery cat toys.

Polychaetes are also the primary food source for many fish, including juvenile striped bass. Think of them like the earthworms of the sea. “There’s a reason why when people go fishing, they use worms,” says Kersey Sturdivant, a marine scientist at Duke University. During their day-to-day lives, fish “feed on worms quite frequently.”

Decades of observations, however, suggest that the Bay’s supply of these tasty snacks faces a snag: a lack of oxygen.

The Cheapeake’s dead zones grow to an average volume of about 10 cubic kilometers at the height of summer, usually in the depths of the estuary. That’s equal to more than 250 billion gallons of water. A portion of those waters will become what scientists call hypoxic, meaning there are less than two milligrams of oxygen per liter of water. That’s low enough to suffocate most animals. (Fish usually need about five milligrams of oxygen per liter to stay active and healthy.)

Researchers have long known from studies in the lab and in estuaries like the Chesapeake that few benthic critters can survive steep drops in oxygen. But they’ve been less sure about how the spate of worm deaths might affect an ecosystem as big as the Chesapeake Bay.

In a recent study, Sturdivant and his colleagues drew from observations taken from around the Bay to come up with estimates. For nine years, the team monitored the health of benthic communities as dead zones came and went up and down the estuary.

These conditions, they calculated, had the capacity to eliminate roughly 90 percent of the benthic biomass -- or the weight of all the critters in a community combined -- at any one site. Scaled up, that could mean that the entire estuary loses 20 to 35 percent of all its benthic biomass every summer. And that’s a lot of missed meals for young rockfish. The researchers published their results in January 2014 in the journal Estuaries and Coasts.

In separate research, Sturdivant and his colleagues tried to recreate a play-by-play of how low oxygen conditions kill off benthic organisms. To do that, they monitored the health of benthic communities on the Rappahannock River in 2007 and 2008 -- that second year was an especially bad one for water quality. Based on their observations, the researchers developed a series of mathematic equations that capture how decreasing oxygen levels could harm bottom-dwelling life.

Benthic organisms, according to the team’s calculations, seem to tolerate plummeting oxygen levels fairly well -- but only up to a point. Once those levels hit around two milligrams of oxygen per liter, the worms and clams begin to die off. And fast. Depending on how low oxygen supplies get, benthic communities stand to lose almost all of their biomass within a matter of days.

These populations don’t recover until oxygen levels return to normal, often in the later summer or early fall, Sturdivant says. He and his colleagues published their results in December 2013 in the journal PLoS ONE.

Whether or not striped bass and other fish in the Bay are hurting because of this annual disappearance of worms isn’t clear. But the results of Sturdivant’s two studies certainly show that benthic organisms are vulnerable to human impacts on the estuary -- and that these impacts could reverberate all the way up the Chesapeake Bay food chain. Which is a good reason to love the critters that wallow in the Bay’s mud.

Photo top left: A mud crab sits in its burrow dug into the muddy bottom of the Chesapeake Bay. Credit: Kersey Sturdivant.