Biodegradable Materials May Take the Scare Out of Ghost Fishing 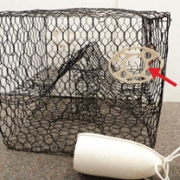 Just below the water's surface, the Chesapeake Bay is home to ghosts. Not the poltergeist kind but rather lost or abandoned crab traps -- or, as they're sometimes called, ghost pots.

Tens of thousands of these pots litter the bottom of the estuary. In most cases, boats have cut the lines that tethered them to their buoys at the surface, making them hard for watermen to retrieve. But many traps haven't lost their ability to catch and detain marine life, potentially claiming a sizable chunk of the Bay's crab population each year. Given that Maryland and Virginia resource managers are working to help the crab populations recover from a steep decline, that's a problem.

One team of researchers in Virginia, however, has come up with a solution to this ghostly dilemma -- biodegradable materials. They've designed a new type of escape hatch that can be built into crab traps and will dissolve over time, allowing trapped animals to flee. The question is: "once the trap is lost, the line is severed, how do you disarm it?" says Donna Bilkovic, one of the team members and a fisheries scientist at the Virginia Institute of Marine Science.

Bilkovic first became interested in these deadly traps, and how to disarm them, during the winter of 2005-2006. That season, she and her colleagues had set out to map the bottoms of parts of the York, James, and Piankatank rivers in Virginia for an unrelated project. But something odd kept popping up on their sonar: squarish objects lay all over the bottom of these tributaries. The identity of those blips was a mystery until two lab members ran over an unmarked crab trap with their boat, getting the mesh device caught in their prop. All those squares, the team realized, must be crab traps, too.

To follow up on that find, Bilkovic's team systematically scoured a 13-square-kilometer patch of the York's bottom, looking for derelict traps. "We ended up identifying 700 [ghost] traps in that area," she says. "So it appeared to be a significant problem."

That's a concern because in Maryland alone, the waters open to crab potting take up much more than 13 square kilometers. That figure is 1,655 square kilometers, to be precise. And it turns out that Bilkovic's initial, and dire, outlook wasn't too far off. A team composed of scientists at the consulting firm Versar and the U.S. National Oceanic and Atmospheric Administration estimated in 2007 that there were 85,000 lost and potentially working pots lying derelict in Maryland waters -- or an average of about 50 pots per square kilometer.

What's worse, the ghost traps may keep catching crabs for two years or more before they get so covered in mussels, barnacles, and other sticky animals that crabs can't enter them, Bilkovic says. Lost pots pose a hazard during this extended period, she notes, because they "self bait." In other words, once a crab is caught, its smell will lure even more crabs to their doom.

In 2008, Bilkovic's team reported that a single lost pot might snag around 50 crabs each year through this deadly cycle. Multiplied over tens and thousands of pots, such hidden fishing likely claims millions of crabs each year. It's not a huge dent in the Bay's crab population, which numbered around 180 million at the start of 2012. But it's one more threat to the long-term health of the fishery, which has fluctuated in recent years, and it's also money out of watermen's pockets, Bilkovic says.

Derelict crab traps don't just catch crabs, either, she adds. The scientist worked with watermen who found and photographed all sorts of animals in old crab traps. Those included lots of diamond back terrapins and even one unlucky muskrat that had been taking a swim.

So it's no wonder that she turned to biodegradable materials. Or, more specifically, escape panels. In September, the scientist and her colleagues rolled out a new design for a type of panel that could be built into existing crab traps. The existing models, and Bilkovic's new version, both feature small exit holes called "cull rings," but these allow only the smallest crabs and turtles to exit. However, when pots that include the new panels are left out in the water for about 10 months, those escape hatches, which measure six inches wide, dissolve entirely, leaving a much wider gap in the pot. Anything that gets into the trap could then get out, Bilkovic says.

The secret to the disappearing act lies in constructing the panels from a class of materials with a long name, polyhydroxyalkanoates, or PHAs, for short. These polymers can be molded to look and feel exactly like various kinds of plastics. But they're also fully biodegradable -- as opposed to traditional plastics, which break down into only tinier plastic particles, Bilkovic says. PHAs, on the other hand, are decomposed over time by naturally occurring bacteria into byproducts such as carbon dioxide that are common in the ocean already.

Other researchers had already explored attaching biodegradable latches to crab traps, allowing small doors on those traps to swing open. But Bilkovic's design is the first to incorporate an entirely biodegradable panel. Doors, she notes, can get stuck shut by mussels and other sea life. She adds, however, that her panels which should cost around $1 a pop, would be more expensive than traditional cull rings, which now set watermen back about 15 to 20 cents each. The team published its findings in the journal Conservation Biology, and its panels will be available for purchase soon through a Maryland-based manufacturer.

The design certainly has potential, says Courtney Arthur, research coordinator for the Marine Debris Program at the National Oceanic and Atmospheric Administration (NOAA). Her group funds research into issues surrounding derelict fishing gear and other types of marine debris and also puts together recommendations for local regulators who are concerned about that waste. "It does look promising," says Arthur whose organization has funded Bilkovic's research. "But we want to be cautious and not base our recommendations on one study."

More research is warranted, says Ward Slacum, a senior scientist at Versar, which is based in Columbia, Maryland. He takes a more conservative outlook on the impact of derelict traps on the Bay's crabs. Drawing from his own team's studies, he says that a lost pot may only catch around 20 crabs every year -- much less than Bilkovic's estimate of 50 crabs. Using that lower number, derelict traps would claim only a tiny fraction, less than one percent, of Maryland's current crab population. That loss rate isn't ideal, Slacum says, but also not a big threat to the future of the Maryland crab cake.

Brenda Davis, the Blue Crab Program Manager for the Maryland Department of Natural Resources, agrees. She says that the state has no plans to require the use of biodegradable materials in crab traps. The best way to sustain the fishery, she says, is still through protecting female crabs -- beginning in 2008, her department has taken steps to limit how many of these important crabs are caught each year.

The science surrounding just how big of a bite derelict fishing gear takes out of the Bay's crab numbers may be unclear. But most agree that it's nice to have options for addressing the problem. "I think the biodegradable panels have value as long as they don't have an added burden on the fishery," Slacum says. One issue is that the new panels could cost boat captains hundreds of dollars more each year. Another question is whether the new crab traps work as well as existing ones.

Bilkovic has studied that last topic, too. During the 2010 crab season, the scientist gave crab traps incorporating her biodegradable escape hatches to a few watermen in Virginia. And, when they fished those new traps right next to their old ones, the biodegradable pots caught just as many crabs. It's a nice result and one that could help to earn Bilkovic a new title: ghostbuster.