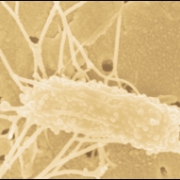 One of the Chesapeake Bay’s most useful organisms may also be among its smallest. What this bacterium with a long name -- that’s Saccharophagus degradans strain 2-40 -- lacks in size, it makes up for in its possible uses for a range of human enterprises: those include medicine, keeping sticky organisms off of boats, and producing cleaner fuels.

Now University of Maryland researcher Ronald Weiner and his colleagues have received several new patents stemming from investigations into this talented microbe, which were funded in part by Maryland Sea Grant. Weiner, a microbiologist at the College Park campus, explains that the microorganism’s success comes from its ability to break apart many hard-to-degrade carbohydrates, such as the cellulose in plants. The new patents, awarded in 2012, seek to harness that power: One describes new methods for producing clean-burning biofuels from plant products. The second concerns technology that could help keep fouling organisms, such as algae, off of ship hulls. The team also received a third patent in spring 2012 that describes the unique groups of enzymes produced by S. degradans.

For Weiner, it’s all in a day’s work for this bacterium. “It’s a very unique organism,” he says.

And one with a long history on the Bay. S. degradans 2-40 was first discovered in the late 1990s around stands of dying cordgrass (Spartina alterniflora), a plant common in coastal salt marshes. One of Weiner’s colleagues isolated the bacterium and reasoned that it had been helping to decompose the plants’ remains. After hearing about the microbe, Weiner was hooked: “I found it to be so fascinating that I just needed to answer some questions about it,” he says.

Years later, he’s still trying to answer those questions. And his work has paid off, earning him more than a dozen patents over his career. One approach he’s taken is to cultivate S. degradans under specific conditions and then harvest the enzymes the microbe builds.

Those new enzyme cocktails have shown a lot of promise for a variety of practical applications. Scientists, for instance, have long searched for new ways to digest plant materials, turning them into ethanol, a fuel that burns more efficiently than gasoline. To date, however, the biofuels industry has relied largely on high-sugar vegetable matter, such as corn, as the fuel source.

In contrast, Weiner says one of his new mixtures of enzymes from S. degradans can produce ethanol from most anything containing cellulose, including old newspapers. And, he points out, there are plenty of old newspapers lying around.

Other enzyme mixtures derived from the bacterium have good uses, too. Certain products can degrade bacterial biofilms, gooey masses that excel at sticking to hard surfaces such as equipment in a hospital or the undersides of boats. Weiner reckons that engineers could use the bacterial enzymes to prevent biofilms from forming in the first place, helping to keep hospital surfaces clean and making boats more hydrodynamic.

All in all, it’s a big resume for a little bacterium.

To turn their patents into marketable products, one of Weiner’s collaborators, Steve Hutcheson, also of the University of Maryland, formed a biotech company, called Zymetis, to do just that. Zymetis was acquired by a second tech company in 2011, which now goes by the name Aemetis. Weiner also collaborated on this work with Larry Taylor, currently a research scientist at the National Renewable Energy Laboratory in Golden, Colorado. Taylor was supported by a Maryland Sea Grant Research Fellowship when he was studying with Weiner for his Ph.D.

For more information, see a profile of Weiner in "Teasing Out Microbial Secrets," an article in Chesapeake Quarterly, Maryland Sea Grant’s magazine.