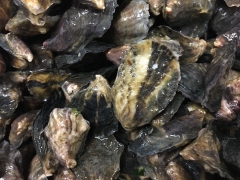 Lately, we’ve all been thinking a lot about viruses because of the COVID-19 pandemic, but we’re not the only species grappling with viral diseases.

For decades, marine scientists have been concerned about viruses that infect shellfish both in the wild and in aquaculture. A particularly deadly oyster virus, the Ostreid herpesvirus, also known as OsHV-1, has been causing massive die-offs globally in Pacific oysters, Crassostrea gigas.

Researchers first detected OsHV-1 in the early 1990s after large mortality events in larval and juvenile oysters in France and New Zealand. Since this first detection, OsHV-1 and its more lethal variants, called microvariants, have been identified throughout Europe, Australia, Asia, Mexico, and the United States. These rapid and mass die-offs are known as Pacific Oyster Mortality Syndrome (POMS). In the United States, POMS affects Pacific oysters in Tomales Bay, California, and more recently in San Diego, California. Here on the East Coast we grow the eastern oyster, Crassostrea virginica, that are not yet affected by POMS. However, as a master’s student in marine disease ecology, OsHV-1 is something that I am closely watching as it could have major implications here in the Chesapeake Bay for our native eastern oyster, as well as other important aquaculture species.

Like some other viruses that infect oysters, OsHV-1 isn’t harmful to humans. But it is not species-specific, so if it entered the Chesapeake Bay, it could find our oysters just as hospitable as it does the Pacific ones. OsHV-1 and its microvariants are known to cause infection in several bivalve species, including the bay scallop (Argopecten irradians) which is native to Maryland Coastal Bays. Other organisms, such as the invasive European green crab (Carcinus maenas), can carry and transmit the virus.

We have been exposing various oyster species to OsHV-1 to better understand the challenges It could pose to these organisms. A recent study conducted by a collaborator of our team exposed native eastern oysters to two OsHV-1 microvariants in the laboratory. They found that eastern oyster stocks can die from OsHV-1. This finding has significant implications for native species in Maryland and its aquaculture industry. Eastern oysters are the only species grown in the Chesapeake Bay, unlike other parts of the world. Further research needs to be conducted to determine how our native species may be affected in nature by this virus.

The Chesapeake Bay is no stranger to disease outbreaks. Many critical aquaculture species have faced disease threats for decades. Eastern oysters have struggled with diseases such as dermo (caused by the parasite Perkinsus marinus) and MSX (caused by the parasite Haplosporidium nelsoni) which continue to cause yearly mortality in both cultured and wild eastern oysters. Aquaculture geneticists have created disease-resistant oyster lines that greatly reduce death due to these diseases. The vulnerability of bay species to diseases such as dermo and MSX indicate that they may be susceptible to viruses like OsHV-1. If that were the case, it could disrupt the industry, as geneticists would need to develop new lines of eastern oysters resistant to OsHV-1.

Disease surveillance and monitoring is an important first step to control disease outbreaks, and that’s where my research with OsHV-1 becomes important. Disease monitoring involves survey testing for the virus throughout the Chesapeake Bay. Although it is unlikely OsHV-1 is currently present, it’s necessary to confirm that current disease outbreaks are not linked to OsHV-1. I have created connections with aquaculture farms through the Maryland portion of the Bay to allow me to test for OsHV-1. My goal is to create long lasting relationships to solidify a surveillance program.

The farmers will either send me oysters to test or I will visit their farm to collect them myself. In the lab, I will take tissue from the oysters and run the appropriate tests that will identify if OsHV-1 DNA is present. It is not uncommon that farmers are hesitant to participate in such testing due to past challenges with disease in the Chesapeake Bay and the oyster industry. Effective communication of our goals to prevent disease outbreaks and promote success in the industry to our communities and oyster farmers is crucial. Currently, I am working with five aquaculture farms throughout Maryland to test for OsHV-1, all of which were very interested in my fellowship project.

Second, laboratory experiments can be conducted to determine if natural infection and transmission can occur among our economically and ecologically important species. We will conduct these experiments at a land-locked pathology lab at the University of Arizona this fall. The reason we will be conducting the work there is to safely contain the virus and avoid possible spread of OsHV-1 to new locations such as the Chesapeake Bay where my home lab, the University of Maryland Systems’ Institute of Marine and Environmental Technology, is located. Scientists want to be as careful as possible when studying organisms that cause disease.

Learn more about this student: /fellows/2020/mariah-kachmar