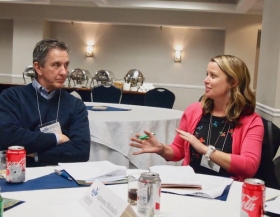 A decade ago, Donald Webster could count the number of oyster farms in the state of Maryland on two hands.

To do that now, he’d have to be an octopus. As of 2016, more than 170 oyster farmers had leased more than 6,000 acres of Maryland’s part of the Chesapeake Bay and its tributaries. The value of that fishery, according to the state Department of Natural Resources, is $5 million, and it has created more than 500 jobs, according to DNR’s look at direct jobs and ancillary jobs in the industry. Every year since the state legislature changed the law in 2009 and allowed shellfish aquaculture in every county in Maryland, the number of leases has increased. Since 2012, according to DNR, it has jumped 1,000 percent – so much so that the agency charged with approving permits has added several more staffers just to keep up.

The wild oyster fishery in Maryland continues to struggle, and has seen a 42 percent drop in that same 2012-2016 time period, according to DNR. That has meant more watermen are getting into aquaculture, and turning to state resources to help them start farms, though at this point in Maryland, the wild fishery harvest still exceeds what oyster farms produce. In some cases, watermen are entering into aquaculture to supplement their wild harvest income; in others, those entering the business have come from areas that have nothing to do with seafood: engineering, law or health care investing.

But the transition from waterman to oyster farmer is not always so easy, said Don Meritt, the hatchery manager of the University of Maryland Center for Environmental Science’s Horn Point Laboratory. He and Webster both work closely with watermen who are entering the farming business, many while keeping a hand in the wild fishery as well.

In November, Maryland Sea Grant held a roundtable to ask oyster growers what kinds of challenges they’re facing, and what kind of assistance they could use to help their industries flourish. Maryland Sea Grant, along with state natural resources officials, has worked closely with the industry for close to a decade. Researchers have informally heard many concerns. But the program leaders wanted to bring growers together and frame the concerns and questions into possible topics to research and answer. With those answers, the industry could grow even more robust.

The state of Maryland has already invested millions of dollars in both oyster restoration at public bars and aquaculture through low-interest loans as well as education programs. There is room to grow; Virginia’s oyster aquaculture industry has close to 100,000 acres under lease, and is the largest on the East Coast of the United States.

Nationwide, NOAA has taken an interest in aquaculture. Oysters fit into that nicely, as the bivalves filter the water and encourage biodiversity; even in cages, where the oysters don’t build reefs, communities of organisms form in clear water.

The agency, and others (e.g. USDA), have expressed interest in funding different research proposals that can assist farmers, and Sea Grant is interested in how its scientists and extension agents might be able to partner with growers to solve problems. One such study is going on right now: Sea Grant’s Matt Parker and NOAA scientist Suzanne Bricker are trying to determine how much nitrogen and phosphorus oysters remove from the water.

“We will use what we hear to develop better research projects,” Maryland Sea Grant Director Fredrika Moser told nearly 30 oyster growers assembled at the Doubletree Annapolis last month. “If we have projects funded, the data we gather will be for everybody…We are always looking for better ways to leverage more money, and we can’t do that without you all talking about what your problems are, and what potential solutions are.”

For most of the oyster farmers assembled, the biggest problem was theft. The oysters grew so well that others wanted them. Theft is not only costly for an oyster farmer’s bottom line, but it could be dangerous. Pathogens live in oysters, and oyster farmers follow strict rules to put bivalves under refrigeration after a certain number of hours. A poacher doesn’t necessarily know or care about those rules; if a customer buys oysters from a pickup truck that were stolen from a lease and gets sick, it hurts the whole industry.

What to do? Maryland’s Natural Resources Police are swamped, and their ranks have been cut. They lost their helicopter, too, which was a prime enforcement tool, in the 2017 legislative session. Oyster growers at the meeting complained about the staffing levels.  Oyster growers suggested using a GIS-type system that would detect movement on the oyster beds and sound an alarm, possibly even connecting into the Natural Resources Police Maritime Law Enforcement Information Network system, which provides real-time footage of the Chesapeake Bay. Stricter penalties for violators came up as well. Oyster farmers would also like better collaboration on a warning system for closed areas due to health concerns. Though the permitting process with the U.S. Army Corps of Engineers has improved because the Corps and the state are working on a joint permit. But growers have said it’s still not as fast as it has been in Virginia, and suggested there might be ways to speed that up.

Farmers also suggested more genetic lines, and a “Burpee” seed catalog of sorts for oyster grow-out operations and upwellers. All oysters are not created equally, for example, some may do better under different water salinities, while others might thrive in open water or more protected areas.

Shell availability is also an issue for the spat-on-shell growers, who set their oysters remotely on shells that are then placed on a bed of shell in the water. (Single-seed oysters grow on tiny pieces of shell and thus the triploid growers do not have as much of an issue with finding available shell.) The shortage of shell prompted some farmers to ask about research into growing oysters on their own shell, already in the water, as opposed to using shell from other sources. The shell shortage is a nationwide problem, and growers are interested in research looking into alternative substrates.

Cages for growing oysters continue to be an area that growers see as potential for improvement such as development of better anti-fouling paints, so the cages would not so quickly be covered with organisms after spending time in water filled with algae. They also were interested in research about minimizing industry pests such as sea squirts, mudworms and flatworms. (A couple farmers suggested, jokingly, that they could find a market for such pests.)

Marketing is also key for success. The Chesapeake Bay oyster still fetches less – in some cases 50 cents less – than its counterparts on Prince Edward Island or in New England. Why? Are they due to chefs’ perceptions? Marketing? How do we change this perception?

One grower suggested a news report of all things oyster, perhaps living online or mailed to inboxes.

Growers noted the industry is poised to keep growing.

“I figure, I’m mid-career, and I’d like to stay until we have a million bushels or 100,000 acres under lease,” Parker told the growers. “So, you all better get busy.”