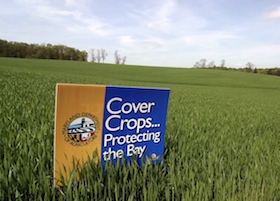 The water quality of American streams has declined for years, and a leading cause is fertilizer and pesticide runoff from agricultural land. The policy tool most often employed in Maryland to reduce this pollution has been cost sharing, where the state pays farmers to adopt more sustainable farming methods.

Planting a cover crop during winter to reduce topsoil erosion has been an important method supported by the Maryland Agricultural Water Quality Cost Share program (MACS) for over 30 years. Cover crops also retain nutrients such as nitrogen rather than letting them run off into the Chesapeake Bay, where they can fuel the growth of large harmful algal blooms, which in turn limit water clarity and stymie the growth of beneficial Bay plants.

Are cost sharing programs effective at improving the Bay’s water quality? One difficulty in answering that question is that a cost-sharing policy may cause participants to voluntarily adopt  sustainable farming methods that are not financially supported by Maryland and that analysts don’t count when they evaluate the benefits of cover crops. This choice would reduce the environmental benefits attributable to the program. Once farmers get interested in adopting one sustainable practice, such as cover crops, they often become interested in using others, if they save time and money.

A reliable cost-benefit analysis of cost sharing should consider all of its financial effects, including any indirect, unforeseen gains. That’s exactly what economist Patrick Fleming of Franklin and Marshall College sought to address in a new study published in The American Journal of Agricultural Economics. His analysis of cost sharing found the cover crop program was having the intended positive effects on Chesapeake Bay water quality: fewer pounds of fertilizer entered local streams while participating farmers increased their cover crop acreage. Fleming also found that the other, un-incentivized practices adopted by farmers provided an extra bang for the bucks spent on cover crops.

Those findings are important because the MACS program has been Maryland’s primary soil conservation incentive program for more than thirty years. Participation is voluntary, and farmers can apply through their soil conservation districts to receive rebates of up to 87 percent of the cost for adopting best management practices. Cover crops are the dominant part of this program — since 2015, they have accounted for 80 percent of the MACS $31.2-million budget. Farmers are paid starting at $45 per acre to plant eligible cover crops, including rye, barley, wheat, triticale, canola, forage radish, and certain legumes such as clover.

To learn more about how farmers used cover crops, Fleming used a survey sent to 1,000 Maryland farmers within the Bay’s watershed. Fleming then created a database of 441 farms from the questionnaire results.

To analyze the responses, Fleming first determined the number of farmers using each of three different sustainable farming practices complementary to cover crops – conservation tillage and two others called contour plowing and strip-crop planting.  Fleming then estimated the effect of cost-sharing on the acreage used in those three conservation practices. He next used a computer model developed by the Chesapeake Bay Program to calculate how many pounds of nutrients stayed out of local rivers downstream of the farms because they employed these conservation practices.

Fleming found that adding the other sustainable farming practices to cover-crop cost sharing substantially reduced the cost of improving water quality compared to using cover crops alone. “Accounting for indirect effects decreases the cost per pound of nitrogen abatement by between 17-25%, and phosphorus abatement by between 60-67%,” Fleming wrote. The Maryland Department of Agriculture’s 2016 summary of the cover crop program estimated that it resulted in 3 million pounds of nutrients removed from the Bay watershed and over 1,200 acres preserved from erosion. But according to Fleming’s findings, some of these savings may have been attributable to an increase in the complementary practice of conservation tillage brought about by the cover crop payments.

Before his study, economists did not have a clear idea if indirect effects of cover-crop cost sharing, such as increased conservation tillage, would be positive, negative, or negligible.

One new project Fleming is working on now uses this same dataset to develop a better strategy for MACS to target farmers who are not currently enrolled in a MACS conservation program and who have the potential to improve local water quality and disproportionately affect Bay-wide water quality for the better.