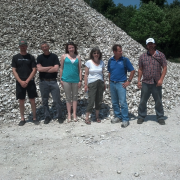 Maryland oyster growers got the chance this summer to engage in shoptalk across an international border. Shellfish farmers from the Canadian province of Nova Scotia visited the state in July for a series workshops and field visits with their peers from the Chesapeake Bay.

The workshops were organized by Don Webster and Don Meritt, shellfish aquaculture specialists with the University of Maryland's Sea Grant Extension Program. The purpose of the four-day event was to give the representatives from Nova Scotia an introduction to the aquaculture industry here -- and to encourage the sharing of information between the industries in Canada and the United States.

Canadian growers, who work in the frequently iced-over waters off the east coast of Canada, have a lot more in common with Maryland aquaculture entrepreneurs than you would think. Both raise the Eastern oyster (Crassostrea virginica), which grows along the East and Gulf coasts of North America.

The workshops consisted of two days of classroom lectures and hands-on activities at the Horn Point Laboratory of the University of Maryland Center for Environmental Science in Cambridge. After, the Nova Scotian shellfish farmers spent another two days touring aquaculture operations on both the Eastern and western shores of the Chesapeake. There, they saw the variety of ways that Marylanders culture and process oysters. The two groups also got the chance to swap ideas on how best to cultivate the shellfish and to learn about ways they might increase their profits by promoting oysters to the public.

"I have a lot of ideas that I'm going to take back home," said Charles Purdy, who grows oysters and quahog clams in Malagash, Nova Scotia.

But the flow of knowledge wasn't one-way, adds Vicki Savoie-Swan. She's the research and development coordinator for the Aquaculture Association of Nova Scotia (AANS). The association, which provides a forum for shellfish and finfish farmers plus others involved in the industry, planned the trip to Maryland with funding from the provincial government of Nova Scotia.

"There were several conversations in which the Maryland industry members were saying, 'Oh, that's a great idea. You do it that way? I might try that in the future,'" says Savoie-Swan, who organized the trip for her members. Such face-to-face interaction "allows for that conversation."

And there's a lot to talk about. The aquaculture industry in Nova Scotia is small but growing, Purdy says. Currently, the AANS has about 90 members, about a third of whom are growers.

As part of the trip, the visitors from Canada took a drive to the MeTompkin Bay Oyster Company in Crisfield, Maryland. There, they got to try their hand at a process called remote setting.

That activity, a key step in growing oysters, relies on large tanks filled with oysters.   Growers introduce oyster larvae to these tanks, and the animals swim to empty shells placed there and metamorphose into spat -- the name for young oysters that have recently attached themselves to hard surfaces. Shellfish farmers use this spat to seed their farms, much like traditional farmers use corn seeds to sow their fields.

As part of an effort called the Remote Setting Training Program, Webster, Meritt, and their partners operate facilities at nine sites strategically placed around the Chesapeake Bay. Growers who are launching their businesses can use the systems on a two-basis to produce the spat they need to plant their leases. The program is funded by the U.S. National Oceanic and Atmospheric Administration (NOAA) and is run in conjunction with the Oyster Recovery Partnership, an organization based out of Annapolis.

During their visit, the Canadian delegation also toured the Horn Point Oyster Hatchery located at the Horn Point Laboratory. This hatchery produces billions of oyster larvae and hundreds of millions of spat-on-shell every year for use in both aquaculture and for restoring wild populations of oysters. At the facility, the group watched male and female oysters in the act of spawning. They also met with the hatchery crew as they completed the various tasks entailed in churning out all those young oysters.

The Horn Point Oyster Hatchery is run in partnership with a wide network of organizations and government agencies, including the Oyster Recovery Partnership, the Maryland Department of Natural Resources, and NOAA.

Purdy, the shellfish farmer from Nova Scotia, says that there are a lot more similarities than differences between the aquaculture industry in Nova Scotia and in Maryland. He would know, too: Purdy's family has been in the business since 1868, when his great-grandfather first started farming shellfish off the coast of Nova Scotia. The family's aquaculture lease is the oldest in all of Canada, Purdy says.

He adds that it may seem like Nova Scotia would be too cold for oysters to flourish. But, because coastal waters along that part of Canada are shallow, they warm up a lot in the summer. "The tide will go out and the sun shines on the flats and warms the flats. And when the tide comes back in, the water is warm," Purdy says. "It makes for a unique area."

In all, Webster says that the workshop was a success. The Maryland aquaculture industry has grown by leaps and bounds since the state revised its aquaculture lease laws in 2009, he says. It's now much easier for potential shellfish farmers to obtain leases for aquaculture operations on stretches of the Bay's bottom or water. The workshop with the Canadians, "went very, very well," Webster says. "I think they were very impressed with what Maryland has been able to do, and our growers were impressed with their operations, too."

Photo: Representatives from the aquaculture industry in Nova Scotia stand in front of a mound of aged oyster shells, which the Horn Point Oyster Hatchery will use to produce spat-on-shell. Credit: Don Webster.