The Winter Crabbers: Q&A about the Annual Dredge Survey

There was only one boat hauling up crabs in Maryland waters in the winter of 2014. It was  a classic 45-foot Chesapeake Bay workboat, and its captain was Roger Morris, a long-time waterman from Dorchester County. For his winter crabbing, however, he was taking directions from Joe Williams, a young biologist working on the annual blue crab dredge survey run by Maryland's Department of Natural Resources. On a slow day they would dig up only five blue crabs off the bottom of Chesapeake Bay despite some 30 dredge runs, on a busy day they would haul up a couple hundred.

Before chucking their crabs overboard, Williams counted, weighed, and sexed every crab: male and female, big and small, dead or alive. Down in Virginia waters, one other biologist on one other boat was doing the same. Together these winter crabbers made 1,500 dredge hauls in the Chesapeake starting in December 2013 and ending in March 2014. 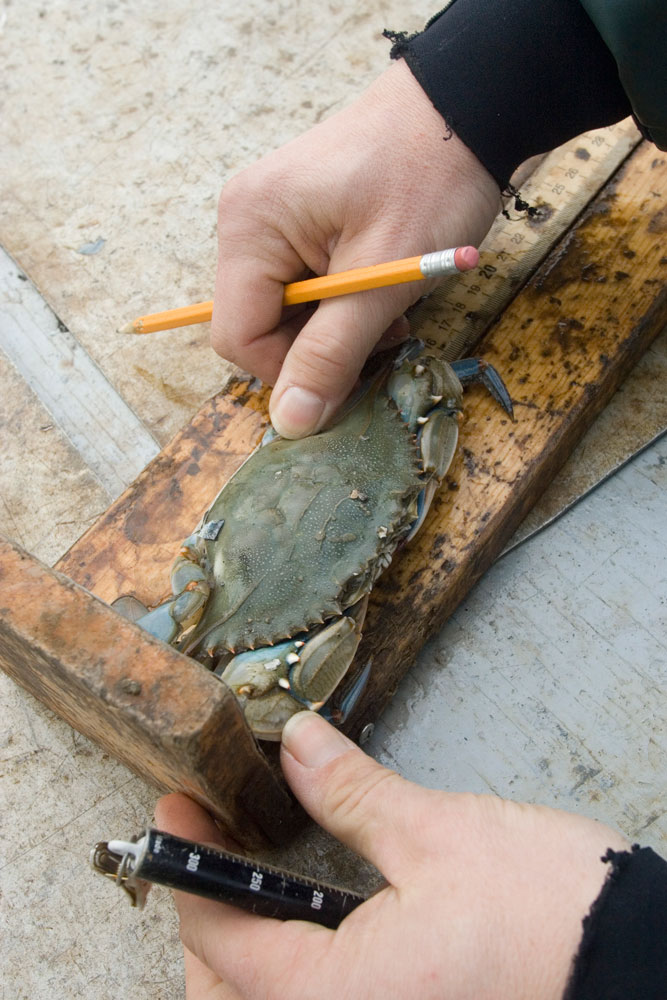 What these crabbers bring back to the dock at the end of the day is not a commercial catch – but a collection of numbers,  jotted down neatly in handheld notebooks. A number for male crabs, a number for female crabs, for juveniles, for dead crabs. In April, the biologists added up all their daily data and worked up some important numbers: an estimate of how many young crabs were entering the Bay population, an estimate of how many females could spawn in the Bay during the coming year. The biggest number of all: their estimate of how many blue crabs were now making their home in Chesapeake Bay.

For 2015 Joe Williams was no longer working the crab survey, but he left a first-hand description of how biologists go about their work.

Why do you use a dredge for this survey?

Because over winter the crabs will bury and hibernate so we need to use a tool that will dig through the mud and dig those crabs up so that we can count them. What we do at each site is we lower a commercial six- foot oyster dredge into the water, pull it for a minute, and we pull up our sample. And whatever crabs that we find in the sample we measure and weigh them and note the sex and their condition, whether they’re alive or dead.

We use a commercial waterman. His name is Roger Morris and we use his boat and his gear because back when there was an open commercial crab dredge fishery in  Virginia he was pretty prominent in going down there every year and doing that  kind of work. So he had experience with crab dredging, he already had the gear lined up on his boat, he had all the equipment we needed. We know we’re getting an   experienced person to do the work.

How do you pick your sampling sites?

We use randomly selected sites so that we can get a good overall view of the bay. If we went to sites where we know that we would catch crabs, the estimate would be much higher -- so that’s why we want to use random selected sites. We don’t want to go to the same sites every year because the bottom does change, crabs do move. So one site that may be productive for one year may not be productive for the next year. And it’s difficult to determine how the sites are going to act from year to year.

The thing I like most about working on the survey is just being outdoors and getting the fresh air. It can get boring, especially if we’re doing a day where we’re not seeing a whole lot. But if we have a day when we have sites fairly close together and we’re catching crabs really well, those are the days you look forward to because you’re going to be kept busy. It’s exciting to see a highly populated area.

You pull [the dredge] up, it’s a clean site, you can see the crabs laying right there on the deck. Sometimes you get a dredge full of [oyster] shell and you literally have to go through -- pretty much shell by shell -- and look for the crabs. Some of them are the size of your fingernail. So we really have to keep a sharp eye out for those guys.

The thing I like least? Probably the rougher days where you still go out and just get the job done. Even those days we’ll cherry pick our sites. We’ll tuck into some creeks so even those days aren’t too bad. I mean there’s not too much I don’t like about getting up and going out there.

How do you record your data?

The data recorded in the field is pencil and paper. It’s a pretty dirty, wet job so we don’t want to use laptops or anything like that or electronics.   After we collect the data, I come into the office and sit at my computer and type in each individual site and each individual crab that we caught during that year’s survey. Typically it’s done on the windier days that we can’t get out.

That blue crab number that Joe Williams brought back for 2014 was a disappointment. For the second year in a row, the total number of all crabs was down -- as were the totals for catchable crabs, for big males, and for females of spawning age. During 2013 and 2014, blue crab populations dropped 60 percent below the 2012 crab count. 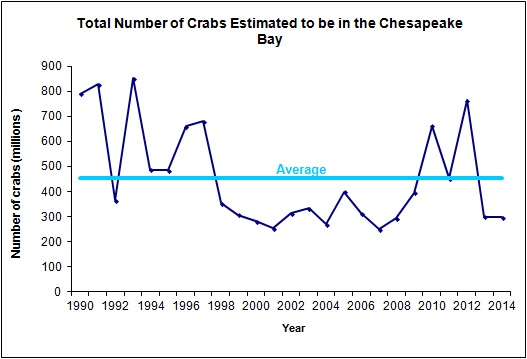 Were blue crabs headed for yet another historic slump? An answer may come from this year's blue crab survey. Frozen off the Bay for many days this winter, biologists in Maryland plan to finish the survey during this first week in April before the  water warms too much and the crabs start crawling out of the mud.By early May, the crabs will be moving and DNR will be able to announce how many blue crab numbers are in the Chesapeake for 2015.

To pursue a doctorate or not . . . that is the question

The Joys of Being a Teaching Assistant