Researchers presented new methods for studying harmful algae in the Chesapeake Bay and other locations during the ninth U.S. Symposium on Harmful Algae held in Baltimore this November. One emerging idea was to use satellite imagery to identify individual species of harmful algal blooms and monitor their activity.

The threats posed by some species are substantial. Sarah Pease, a Ph.D. candidate at the Virginia Institute of Marine Science, told a symposium audience about her research exposing adult oysters to algae called Alexandrium monilatum or A. Mon, which are found mostly in the lower Chesapeake Bay, in Virginia. Between 50 and 80 percent of the adult oysters died within 96 hours. Earlier work led by Professor Kimberly Reece, also of VIMS, with help from Pease found 100 percent of oyster larvae dead by 96 hours.

Scientists have turned to satellite imagery to track harmful algal blooms (HABs) because it can provide resource managers with detailed information about their location, timing, and extent in real time.

For example, Danielle Dupuy, a marine scientist at the National Oceanic and Atmospheric Administration (NOAA), described at the symposium how she and her colleagues detected several toxic algae species using measurements of red light reflected by the algae. Their instrument of choice was MODIS, which passes over the upper Chesapeake Bay, in Maryland, every one to two days on the Terra and Aqua satellites. The drawback was that the results showed the presence of harmful algae with a precision of only about 3,000 square feet on the Bay’s surface — a resolution too low to pinpoint the boundaries of a harmful algal bloom and track its movement over time.

For more precise results, Dupuy turned to the Ocean and Land Color Imager device carried on the Sentinel-3 satellite, which the European Space Agency deployed in February 2016. Her new results upgraded the precision to about 1,000 square feet. This improvement in detail means the method can be used not just to monitor the Bay itself but also its tributaries to alert the public when to avoid particular beaches exposed to toxic harmful algal blooms.

Unlike in Virginia, Maryland's portion of the Bay has harmful algal blooms that often comprise multiple species, making it difficult to identify any one specific harmful algae species by using satellites to look for its characteristically emitted light. This limitation makes it challenging for public health officials to assess toxicity levels when a bloom is observed — different harmful algae species have different levels of toxicity.

With these challenges in mind, Dupuy's colleague, Michelle Tomlinson, a coastal scientist at NOAA, led an effort to combine satellite data with ecological data in an attempt to better identify individual harmful algal bloom species in the upper Chesapeake Bay. At the HAB symposium, Tomlinson presented results suggesting that a new method of merging this data may provide government officials with a tool to monitor the health and safety of people and of the upper Chesapeake Bay oyster aquaculture industry in real time.

Her new method applied data from the Sentinel-3 satellite with on-the-ground measurements of different harmful algae habitats in the Bay to detect individual species. Certain harmful algal blooms found in the Chesapeake Bay glow in the dark and were observed with the satellite’s Ocean and Land Color Imager. But without additional information, the precise species of the HABs that glowed were not identifiable. Tomlinson and her colleagues overcame this obstacle by combining their satellite data with environmental measurements of time of year, salinity, temperature, and nutrient concentrations, and they were able to detect individual species, such as Heterocapsa. 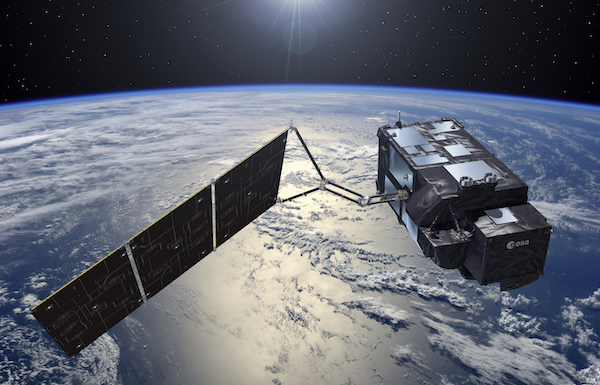 Tomlinson is cautious yet optimistic about these early results. Although the new method cannot yet be used as a forecasting tool, it may prove to be a way to monitor the growth and track the trajectory of harmful algal blooms in real time. Tomlinson said more research  validating data from past blooms is needed to develop  an early warning system for people and the Bay aquaculture industry.

The 9th U.S. Symposium on Harmful Algae had numerous sponsors, among them Maryland Sea Grant, Delaware Sea Grant, and Virginia Sea Grant; the University of Maryland Center for Environmental Science; the Maryland Departments of Natural Resources and of the Environment; environmental consulting firms; and several other agencies, including NOAA's National Centers for Coastal Ocean Science.

Image, top left: This illustration is based on data from satellite-borne sensors indicating the locations (red dots) in the Chesapeake Bay of blooms of the harmful algae Alexandrium monilatum.

More information on harmful algal blooms may be found in a scientific workshop report by Maryland Sea Grant.

To pursue a doctorate or not . . . that is the question

The Joys of Being a Teaching Assistant