By Lowering the Nutrients, the Susquehanna Flats SAV Bed Enhanced Its Own Recovery

Cassie Gurbisz studies the ecology of coastal estuaries with a particular interest in the restoration and resilience of underwater grasses — a keystone set of species critical to the long-term health of the Chesapeake Bay. In recent years, this submerged aquatic vegetation (SAV) has made an unprecedented recovery in the Susquehanna Flats region of the upper Bay after decades of steady decline. Gurbisz has been studying SAV at Susquehanna Flats for a long time, focusing earlier on the changes in the grasses and their habitat over time to better understand their resurgence.

Now she has published research from a new project, partially funded by Maryland Sea Grant, that was one of the first to combine physical measurements with biogeochemical observations of SAV to better understand interactions between SAV growth and nutrient concentrations (nitrogen and phosphorus) in Bay water. The most striking finding was water inside the SAV bed had significantly lower concentrations of dissolved nitrogen than did the water outside the bed. The new evidence may help explain how underwater grasses came back to the Susquehanna Flats.

As a Ph.D. student, Gurbisz conducted her dissertation research at the Horn Point Laboratory, part of the University of Maryland Center for Environmental Science, about why this comeback occurred after nearly 50 years of decline. The Flats are located in about 19 square miles of shallow water in the upper reaches of the Chesapeake Bay, and they are essentially an underwater delta of the Susquehanna River, which flows into the estuary there.

A combination of particularly dry weather and decreased nutrient concentrations provided the conditions the SAV bed needed to expand about four-fold starting around 2000. Although a reduction in excess nutrient runoff from the Susquehanna into the Bay played an important role, the lack of large destructive storms during this six-year period (1997-2002) was the critical factor, Gurbisz’ research indicated. Despite the damage done to the Flats in 2011 from Tropical Storms Lee and Irene, SAV abundance has persisted, and the bed’s area is increasing again. Gurbisz, now an assistant professor at St. Mary’s College of Maryland, next wanted to study a related scientific question: how were the expanded, resurgent SAV beds in the Susquehanna Flats affecting the chemistry of the ecosystem?

From 2012 to 2015, Gurbisz and her Horn Point colleagues collected physical measurements of SAV biomass as well as measurements of dissolved nitrogen concentrations, an invaluable nutrient for plants. The goal was to collect a suite of measurements that could be used to assess the environmental health of the Susquehanna Flats across space and time. The team collected samples at multiple sites both inside and outside of the Flats and during two different times of the year: from May to June, when the Bay grasses have little to no growth, and from August to September, when they experience substantial growth

Gurbisz observed that SAV directly impacts its habitat by removing nitrogen from the water. Nitrogen concentrations in the water were persistently high during the May to June season, when SAV growth is low, but concentrations were low during the high SAV growth season from August to September. Conversely, SAV biomass measurements (recorded as grams per square meter) were higher in the August-September period compared to May-June.

Those observations supported Gurbisz’s conclusion that the plants incorporated nitrogen from the water into their stems and roots as part of their natural growth processes. SAV plants are self-feeding organisms, or autotrophs. This means they conduct photosynthesis; they use carbon and nitrogen from their environment as building blocks to grow.

The physical measurements collected for Gurbisz’s research helped explain why nitrogen concentrations changed between these two seasons. The scientists had observed that the water moving through the Susquehanna Flats was slower when the plants were abundant and growing up to the surface of the water (August-September) compared to when the plants were small and not widely distributed. More SAV in the bed acted as a brake on the water current, slowing it down. When the water stayed in the SAV bed for longer, the underwater grasses could capture more of the water's dissolved nitrogen.

Gurbisz had identified a positive feedback loop between the SAV biomass and nitrogen concentrations. When the underwater grasses metabolize nitrogen, they change physical and biogeochemical characteristics of its habitat in ways that promote the further growth of SAV. The plants’ removal of nitrogen from the water improves water quality and SAV growth in the plant bed because the nitrogen might otherwise serve as a nutrient fueling the growth of algal blooms in the Flats. These blooms can impede the growth of SAV by clouding the water and decreasing the amount of light that reaches the grasses — light they require for photosynthesis. 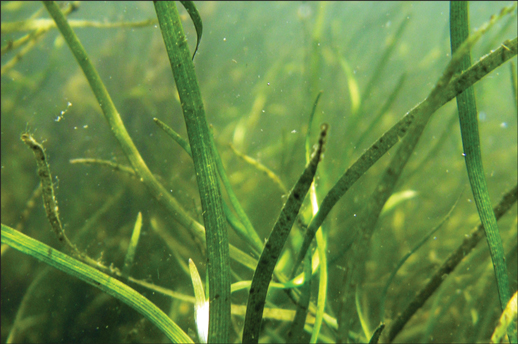 What do these results mean for the well-being of Susquehanna Flats SAV? “This paper is one of many pieces of evidence that suggests SAV can enhance their own recovery” by altering the conditions around them, Gurbisz says. When natural resource managers consider how to protect and encourage the growth of Bay underwater grasses, they should consider that SAV may be relied upon to promote its own growth, provided humans do not adversely impact their habitats.

Now that we know that SAV can change the habitat and significantly reduce local nutrient concentrations in one location, it’s time to learn whether this is true for the Bay at large. “Susquehanna Flats is a huge shoal,” Gurbisz says. “That’s why it’s such a good habitat for SAV. Not many other areas in the Bay have such large continuous, shallow areas.”

Gurbisz’s next topic of research is to quantify the nutrients and sediments that are retained by underwater grasses across the upper Chesapeake Bay, outside of the ideal habitat provided by the Susquehanna Flats. She’ll be expanding the work to several additional sites with more sampling over several field seasons. Quantifying the amount of nutrient and sediments retained should help build a fuller picture of the extent to which SAV can absorb nutrients loading in the Chesapeake Bay.